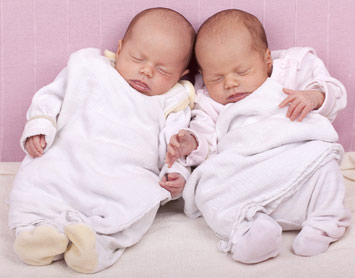 You might think that in the cramped quarters of the womb, twins would experience pretty much the same environment. But a new study, published 15 July in Genome Research, suggests otherwise.

Identical twins, who have the same DNA, are born with widespread differences in their epigenetic profiles —  chemical modifications to DNA that control when and where genes are expressed.

Epigenetics plays a vital role in normal development but has also been linked to many disorders, including autism. Analysis of postmortem brain tissue, for example, shows that epigenetic markers vary in people with autism compared with controls.

Studies suggest that when one identical twin has autism, the other will also have it about 40 to 90 percent of the time. A better understanding of how the prenatal environment influences epigenetics could help pinpoint early environmental risk factors for autism and help explain those cases in which only one twin has autism.

Researchers in Australia showed in 2011 that gene expression in twins varies widely at birth, as does their methylation — a type of epigenetic change — at certain sites in the genome.

In the new study, the same group analyzed methylation at 20,000 sites across the genome in the umbilical cord tissue, cord blood and placenta of 12 sets of fraternal and 22 sets of identical twins. (Fraternal twins share as much DNA as non-twin siblings, so comparing identical and fraternal twins can give scientists a sense of how much genetics contributes to the factor under study.)

The researchers found that epigenetic profiles vary significantly among both types of twins. They speculate that the differences arise partly randomly and partly from environmental factors, such as differences in blood supply, exposure to infection and the weight of each twin’s placenta.

The researchers say these changes may persist throughout life, potentially setting up a fetal “program” for developing certain diseases.

The findings highlight the need for long-term studies in autism that follow mothers starting during pregnancy and continuing throughout a child’s development, and measure epigenetic changes along the way.