The power of talk 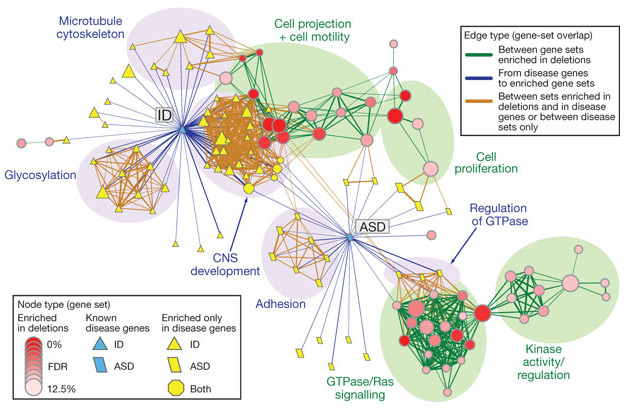 Crosstown express: This functional map of autism-linked genes created a buzz at an interdisciplinary meeting two weeks ago.

In order to understand the interaction between genes and environment in autism, researchers in different disciplines will have to move back and forth between those two realms, stretching out of their intellectual comfort zones. But if the mood at an interdisciplinary workshop two weeks ago is any indication, that challenge is also a source of excitement.

Co-sponsored by the National Institute of Environmental Health Sciences (NIEHS) and Autism Speaks, the workshop, called Autism and the Environment, drew more than two-dozen scientists.

The first step in linking heredity and the environment may simply be to start talking.

One researcher noted that results from molecular studies should be validated in different model systems. Another suggested taking a big-picture approach because, for example, hormones and neurotransmitters can affect the immune response to environmental toxins that may play a role in autism.

How will we know where to begin, wondered Patricia Jensen, an NIEHS scientist. “I’m wondering if the genetic studies can point to some common pathways?”

Absolutely, said Stephen Scherer, director of the Centre for Applied Genomics at The Hospital for Sick Children in Toronto, Canada. For a recent study of genetic copy number variations (CNVs) involved in autism, Scherer and his colleagues had created a functional map of autism-linked genes.

The whole group clamored to see the picture and, after some fiddling with flash drives, the image was projected onto the big screen at the front of the room.

I’d seen Scherer’s figure before, while covering his paper on copy number variations for SFARI. Then, it had seemed dry and a little bit mystifying: in the image (left), autism-linked genes are clustered into overlapping pathways, a Gordian knot of biochemical abbreviations. But it fired up the imaginations of the scientists in the room.

Could knowing which biochemical pathways are involved in autism help scientists zero in on environmental chemicals that affect the pathways, wondered Isaac Pessah, director of the Children’s Center for Environmental Health and Disease Prevention at the University of California, Davis.

Geraldine Dawson, chief science officer of Autism Speaks, pointed out that the Autism Genetic Resource Exchange, a database that includes detailed genetic and environmental exposure data from more than 1,300 families affected by autism, could help make these links. “This is a database that’s open for use,” she said. “It’s just sitting there.”