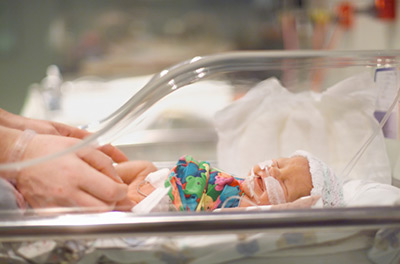 Three factors related to childbirth — preterm delivery, small size at birth and cesarean delivery — contribute to more than 10 percent of autism cases in the U.S., according to a study published in the April issue of Annals of Epidemiology.

Several studies have documented associations between autism and ‘perinatal’ risk factors — those occurring around the time of birth. For example, researchers have found that the risk of autism jumps up for babies born early or underweight compared with full-term, healthy-weight babies. But simply showing a correlation leaves open the question of whether one causes the other.

The new study is the first to investigate the population-attributable fraction (PAF) for each risk factor. This statistic captures the proportion of autism cases that would not arise if a given risk factor were eliminated. An analysis of this sort does not prove that perinatal risk factors cause autism directly but represents a mathematically rigorous step forward.

The researchers analyzed birth information for 703 children born in 1994 and 1,339 born in 2000. The data come from the Autism and Developmental Disabilities Monitoring Network, the source of the Centers for Disease Control and Prevention’s autism prevalence statistics, and represent 48 counties across eight U.S. states.

Overall, the researchers say, these three perinatal factors accounted for about 12 percent of autism cases in the two years of the study. That is a relatively large number, considering that all single-gene mutations that cause autism may together account for less than 20 percent of cases.

It’s also striking that the overall PAF for perinatal risk factors remained relatively stable over time, even as the prevalence of autism, the rate of preterm births and clinical recommendations for cesarean sections shifted. For example, the prevalence of autism rose from 1 in 150 children born in 1994 to 1 in 88 born in 2000. The rate of preterm births also increased nationwide between 1994 and 2000, the two years covered in the study (although it has been decreasing since 2006).

Also, the researchers lumped together emergency cesarean deliveries and those planned because of a previous cesarean birth. Owing to policy changes in the U.S., planned cesareans may have been more common in 2000 than in 1994. This may muddy the results because some surgeries may have been unrelated to any problems that affect autism risk.

In fact, the finding of a relatively high PAF for cesarean delivery is puzzling. A 2011 analysis of data drawn from multiple studies showed that cesarean birth has little association with autism risk.

Overall, this may mean that researchers still need to tease apart various underlying factors in order to fully understand the study’s results. It’s possible that preterm birth, for example, doesn’t cause autism directly but that some other factor contributes to both preterm birth and autism.

The researchers acknowledge this, saying that their statistics reflect the proportion of autism cases due to the many factors that may lead to small size at birth, premature birth and cesarean delivery. But what specifically affects pregnancy and labor outcomes is often unknown.

It’s also important to bear in mind that population-level statistics such as these don’t tell us much about individual risk. They don’t mean that any particular child’s autism can be blamed on preterm birth or that a woman who has a cesarean section is likely to have a child with autism.

But they do suggest that preventing preterm birth and pregnancy complications — a good idea from any angle — might just make a difference for autism.