State laws for autism coverage are uneven across U.S. 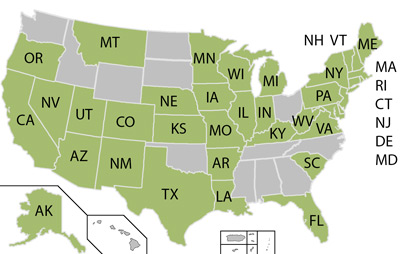 Only 37 out of 50 states and the District of Columbia mandate that private insurers cover behavioral therapies for children with autism. Behavioral interventions can help children with autism build basic skills and may reduce costs for their care in adulthood. But treatment costs range from $10,000 to $100,000 a year, making insurance companies reluctant to pay for it. In some states, mandates settle this problem.

The study, by the National Institutes of Health, examined 30 states that passed insurance mandates between 2001 and 2012. These states tend to have a high prevalence of children diagnosed with autism, about 6.6 per 100 children, and a high density of pediatricians. These two factors are suggestive of a good infrastructure — doctors, parents and teachers who are well versed in recognizing the symptoms of autism.

For example, children with autism in Kansas and Nevada whose families have private insurance can be diagnosed early and start therapies that improve their daily skills. Covered treatments include speech therapy and applied behavior analysis, a group of therapies that target language, social and academic skills.

But in states such as Alabama, Idaho and North Dakota, which lack the mandates, families are forced to rely on Medicaid, a government-funded healthcare program that is facing budget cuts, or school services, which often don’t provide behavioral therapy.

These states tend to have a lower prevalence of children diagnosed with autism, about 4.2 per 100 children, compared with states that have passed mandates. Because the prevalence of autism should be about the same nationwide, the researchers suggest that these states are under-diagnosing children because of poor infrastructure.

The financial burden that therapy places on families who do have a child diagnosed with autism may prompt some to move to states with friendlier laws. This may decrease the manpower and clout needed to pass a mandate in states that need it the most.

Interestingly, political affiliation has some bearing on whether mandates become laws. States with Republican majorities in their legislatures are more likely to require insurance coverage than Democrat-led states. This surprised the researchers, who expected Republicans to eschew government intervention in private healthcare.