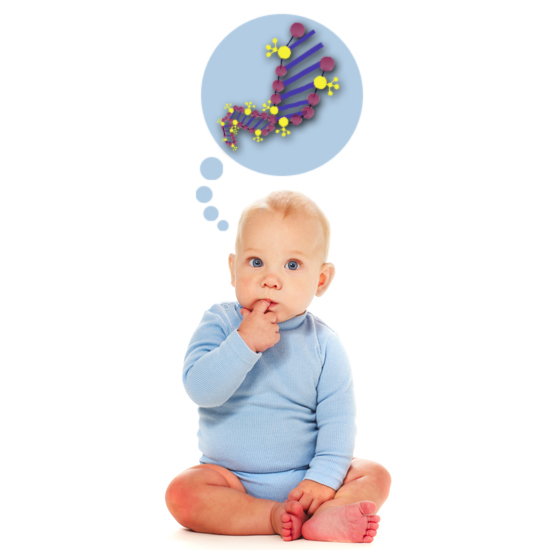 Next generation: New tests for fragile X syndrome screen for methyl markers on the FMR1 gene, which appear only in people with the full-fledged syndrome.

As SFARI reported this week, new DNA tests may bring us closer to universal screening for fragile X syndrome in pregnant women and newborns. But the tests also raise an ethical conundrum: they pick up abnormalities in some babies who won’t develop symptoms until adulthood, if at all.

People with fragile X syndrome carry more than 200 repeats of a particular genetic sequence in the FMR1 gene, located on the X chromosome. The new DNA-based methods detect the disorder by counting the number of repeats.

But there’s a hitch. The tests also detect ‘premutation’ carriers, who have only 55 to 200 repeats and often don’t show symptoms in childhood. Also, some girls who carry more than 200 repeats never show any symptoms because their second, healthy X chromosome compensates.

Discovering these glitches in newborns could cause unnecessary anxiety in the parents, an Australian team notes in the September issue of Genetics in Medicine. It could also lead to ‘vulnerable child syndrome‘, a situation in which the expectation of getting sick exacerbates, or even creates, symptoms.

The researchers have designed a test that avoids these problems by screening not for DNA repeats, but for methylation patterns. FMR1 is silenced by methyl groups only when it carries more than 200 repeats. In a small study published earlier this year, the researchers found that their test accurately detects cases of fragile X syndrome, but does not pick up unaffected females with the full mutation or anyone carrying the premutation.

The findings are exciting, if preliminary: the study was based on only 125 people. But I think when it comes to fragile X screening, the accuracy, speed and costs of the tests — no matter which type — are more important considerations than potential ethical snags.

Both the new DNA tests and the methylation-based tests take only a few days. Catching the disorder early can give parents the opportunity to begin crucial early intervention therapies.

There are other benefits to using the more sensitive DNA-based test. Even though premutation carriers many not have problems in childhood, many develop serious motor problems as adults. As for healthy baby girls with the full mutation, the information can help them make reproductive decisions later on, and immediately help their parents make decisions about future pregnancies.