Spatial, verbal skills in autism even out with age 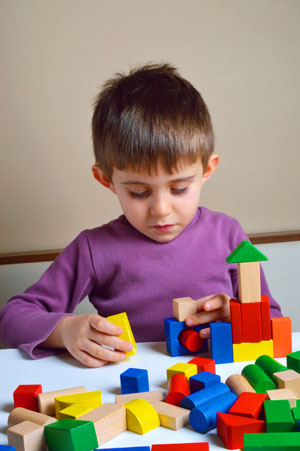 A rigorous new study confirms that boys with autism tend to score higher on tests of spatial and analytical abilities than on those for verbal skills. But the gap decreases by the time they reach 10 years of age. The report was published in the January issue of the American Journal on Intellectual and Developmental Disabilities.

The researchers used a test that measures both verbal and nonverbal intelligence quotients (IQ). The verbal questions gauge how well a child understands and speaks to other people, and the nonverbal section evaluates ability to work with spatial concepts, such as building a sophisticated structure with blocks or drawing a detailed picture.

The researchers looked at scores for nearly 2,000 children, aged 4 to 17 years, enrolled in the Simons Simplex Collection, a large database of families that have one child affected with autism and unaffected parents and siblings. (The collection is funded by the Simons Foundation, SFARI.org’s parent organization.)

Of the 804 children with autism who have unequal scores, 523 were between 4 and 9 years of age at the time of testing, showing that younger children drive the gap in scores. Also, 490 of the 804 children are boys who have higher nonverbal than verbal IQs. In contrast, girls are equally likely to score better on spatial skills or on verbal skills.

On average, boys and girls in the study do about equally well verbally, but the boys with higher nonverbal scores also have slightly lower verbal scores than the other children. This may explain why these boys have social difficulties, such as problems making eye contact and interacting with others.