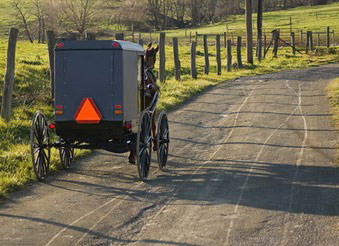 The Amish may lead a simple life, but they’re helping scientists understand one of the most complicated molecular pathways in autism.

Genetic studies have fingered hundreds of variations linked to autism, so it’s understandably exciting when several turn out to belong to the same network. One of the most studied (and most therapeutically promising) pathways is mTOR, short for mammalian target of rapamycin.

A new study of an extremely rare form of epilepsy found in Amish groups adds heft to the idea that mTOR is an important biochemical player in autism.

Several genetic diseases that stem from glitches in the mTOR system share symptoms with autism. Mutations in the mTOR-related TSC1 and TSC2 genes, for instance, cause tuberous sclerosis, a disease marked by benign brain tumors and, in about half of the cases, autism. Likewise, some individuals carrying mutations in the PTEN gene, which encodes an enzyme that acts upstream of mTOR, have abnormally large heads, seizures and autism.

The new study focuses on a syndrome called PMSE (for polyhydramnios, megalencephaly and symptomatic epilepsy), which causes intellectual impairment and seizures in a small subset of Amish children. PMSE is caused by a deletion of the STRAD-alpha gene.

Peter Crino‘s team at the University of Pennsylvania analyzed mouse models of the disease as well as postmortem brain tissue from one baby with PMSE. His group found that STRAD-alpha deficiency results in particularly large neurons, and causes abnormal mTOR signaling during early brain development, compared with controls.

This is good news for scientists who are hoping to treat autism with rapamycin — a naturally occurring bacterial product that was first discovered in a Polynesian soil sample. The U.S. Food and Drug Administration approved the drug more than a decade ago for preventing rejection of organ transplants (rapamycin suppresses the immune system), and it is also sometimes used to treat some types of brain, skin and connective tissue cancers.