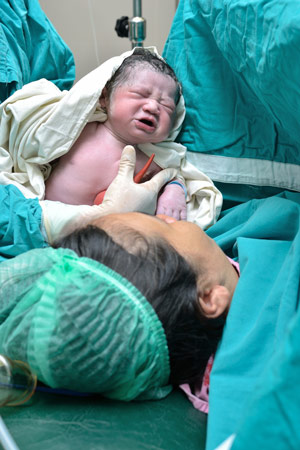 People feel enormous social pressure to make the ‘right’ choices for their children. In fact, the pressure builds before those children even enter the world, with decisions related to pregnancy and childbirth. For example, some people see having a cesarean section (C-section) — even a medically mandated one — as a failure on the part of the mother.

In June, a New York Times parenting blogger wrote about a kindergarten entrance form that asked whether her child had been born vaginally or by C-section. The form seemed to imply, to the writer’s frustration and fury, that the former is better.

It’s true that epidemiological studies have linked birth by C-section to a variety of conditions, such as asthma, diabetes and gastrointestinal problems. Several large studies have found that birth by C-section raises a child’s risk of autism by about 20 percent. But a new study of Swedish siblings provides the best evidence to date that there is no causal link between the two.

The study comes at a critical time. Cesarean births accounted for nearly one-third of all deliveries in the U.S. in 2013, and autism prevalence continues to climb worldwide.

Epidemiologists have been hamstrung by methodological limitations in their quest to explore this relationship. Studies that simply juxtapose data about mode of birth and autism diagnosis can’t suss out whether C-sections increase the risk of autism. It’s possible, for instance, that the same genetic factor raises the risk of both cesarean birth and autism.

The new study analyzed birth registry data and health records for nearly 2.7 million children born in Sweden from 1982 through 2010, including 28,290 children with autism. Among this group, children born by planned or emergency C-section are about 20 percent more likely than average to have autism — in line with previous findings.

But the researchers found an entirely different pattern when they compared children who have autism with their unaffected siblings. The Swedish registry includes 13,411 sibling pairs in which one child has autism and the other does not. In this group, 2,555 sibling pairs consist of children born by different methods.

An analysis of the sibling pairs revealed that children born by C-section have the same risk of autism as those delivered vaginally. The association between cesarean delivery and autism may stem from a factor common to both autism and the need for cesarean delivery, the researchers say.

These types of studies are a clever way to look for causal associations when randomized trials aren’t feasible. In the case of birth method, for example, it would be unethical to randomly assign women to cesarean or vaginal delivery. Other studies applying this sibling design to similar Swedish datasets have found that cesarean birth doesn’t cause asthma or diabetes, either.

It’s best not to be cavalier about C-sections, or any major surgery for that matter. It’s also important to consider that vaginal birth may serve some important functions, such as exposing infants to microbes in the birth canal, that help to prime their microbiomes and immune systems.

Still, moving away from studies that tenuously tie autism to various environmental factors, and toward ones that can dig into causal relationships, is a welcome development, and the new study may come as a comfort to mothers who feel anxious about having had a C-section. Designers of kindergarten entrance forms, take note.