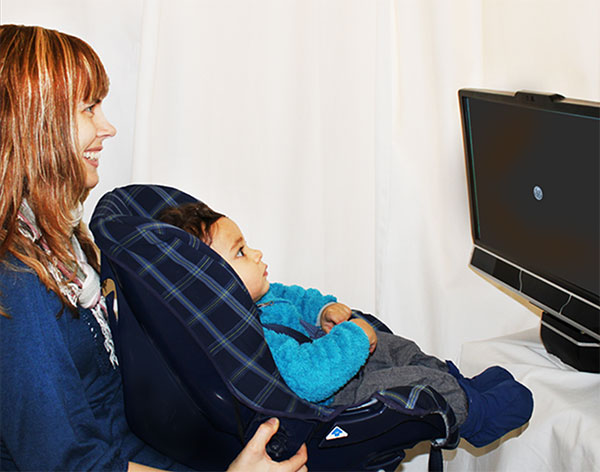 It’s been six years since researchers reported the eye-opening discovery that the pupils of children with autism constrict unusually slowly in response to light. The finding raised the intriguing possibility that eyes could act as a window into autism risk, or a biomarker for the disorder.

A new study published 3 March in Molecular Autism nudges this possibility closer to reality. It reports that infants who have a sibling with autism — and therefore a 20-fold increased risk for the disorder themselves — have an altered pupil reflex. But here’s the rub: Unlike the slow pupil reflex seen in children with autism, the reflex in these so-called ‘baby sibs’ is unusually fast.

The researchers studied 29 baby sibs and 15 infants with no family history of the disorder. They showed the infants, who were all 10 months old, brief flashes of light on a computer screen as an eye tracker measured the magnitude and speed of the babies’ pupil reflex.

Overall, the pupils of baby sibs constricted roughly 15 milliseconds faster than those of the other babies. They also became smaller overall by about 8 percent. Although the babies showed group differences, the two groups overlapped substantially. More than half of the baby sibs had pupil responses that were indistinguishable from those of controls.

It is uncertain whether the speed and strength of the pupil reflex predicts which infants will go on to be diagnosed with autism. The authors plan to follow the infants until age 3, when they can be reliably evaluated for the disorder.

It’s also unclear why the pupil reflex is fast in infants at risk for autism but slow in children diagnosed with the disorder. Studying how the reflex changes with age might provide some clues. A 2012 study found that the pupil reflex accelerates between age 6 and 8 in typically developing children, but not those with autism.

Still, the findings may underscore the importance of certain molecular mechanisms in autism. For example, the pupil’s response to light is guided by brain circuits that rely on the neurotransmitter acetylcholine. Postmortem brain tissue from people with autism shows increased levels of some acetylcholine receptors.