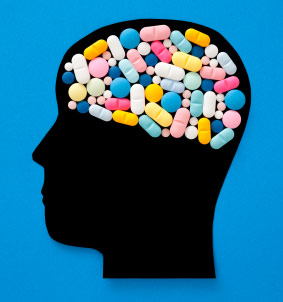 Children and teens with autism — or the related disorders schizophrenia and attention deficit hyperactivity disorder, among others — are often prescribed antipsychotic drugs from an early age.

But little is known about the long-term effects these drugs may have on the brain.

Research on schizophrenia suggests that many of these drugs affect brain volume: Antipsychotics appear to shrink the brain and the mood stabilizer lithium seems to enlarge it. What has been unclear so far is whether these changes result from the treatment or are a normal part of the disease course.

A new study confirms that the observed changes in brain size are the result of drug treatment. Researchers treated rats with either the antipsychotic haloperidol or with lithium every day for eight weeks, roughly equivalent to five years for humans.

According to brain scans taken before and after treatment, haloperidol shrank the volume of gray matter, which contains neuronal cell bodies, by six percent, and lithium increased gray matter volume by three percent. The findings were published 8 May in Biological Psychiatry.

The study leaves many questions unanswered. It’s not clear, for example, whether these changes reflect part of the benefits of the drugs, or whether they are a negative side effect. Also, the researchers used normal rats rather than those engineered to mimic the symptoms of schizophrenia or autism, so they can’t say whether the drugs would have different structural effects in those animals.

Still, the findings could be relevant for children with autism. About one in three people with autism are treated with antipsychotics to relieve irritability, aggression and sleeplessness. In fact, the only two drugs approved by the Food and Drug Administration to treat autism, risperidone and aripiprazole, are both antipsychotics. (Other drugs, including antidepressants and stimulants, are commonly prescribed as well.)

Although neither risperidone nor aripiprazole was tested in the current study, they share some molecular mechanisms with haloperidol. Risperidone binds to receptors for brain-derived neurotrophic factor, a protein that stimulates the growth of new neurons and neural connections.

Lithium has been shown to reverse some of the signs of fragile X syndrome, an autism-related disorder, in animal models. Preliminary evidence suggests it can improve irritability in people with the syndrome.

Given that autism is thought to be a disorder of brain connectivity, and that changes in brain size are associated with the disorder, it seems crucial to understand the long-term effects of drugs used to treat it.