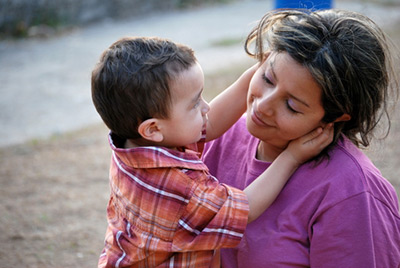 Mothers of children with autism, whether they are Latina or non-Latina white women, often notice something amiss when their babies are about 18 months old. Both groups of women tell pediatricians about their concerns when their children reach about 2 years of age — but the similarity in experience ends there.

Latino children receive their diagnoses of autism an average of one year later than their non-Latino white peers, according to a study published in the June issue of Intellectual and Developmental Disabilities.

The study also found that Latino children receive less specialty care, such as birth-to-three services — a nationwide program that provides therapy to children with developmental delays until age 3 — and autism therapy funded by Medicaid, a government program that provides medical services to low-income families. The children also tend to have more unmet needs than white children do, missing out on recreational programs and psychological services, for example.

The studyinvestigates the reasons for these disparities, showing that mothers who have a college education and access to information about autism, including magazines and books, are better able to find autism services for their children.

Many of the Latina mothers said they were unaware of the services, but became interested in them after learning about them. Engaging minority parents could go a long way toward broadening the reach of these services.

The difference in prevalence may also be the result of language barriers or anxieties about revealing immigration status.

For example, autism diagnosis rates for Latino children decrease when a climate of strong anti-immigration sentiment exists, prompting measures such as California’s Proposition 187. This measure mandated the limiting of public services to undocumented immigrants, but a district court stopped its implementation soon after voters passed the measure.

In the new study, the researchers surveyed the mothers of 48 Latino children and 56 non-Latino white children with autism between the ages of 2 and 22 years. The researchers did not confirm diagnosis with any tests.

The researchers visited the children’s homes and interviewed the Latina mothers in their preferred language. The white mothers answered the same questions on a paper survey and mailed in their responses.

The white mothers were older, earned more money, had higher levels of education and were more likely to be married or living with a partner than the Latina mothers. They also reported more behavioral problems in their children, but it’s unclear whether that’s because their idea of bad behavior differs from that of the Latina mothers.

When asked how they learned about autism, white mothers were more likely than Latina mothers to have acquired information from other parents, books and magazines, healthcare professionals and the Internet. Both groups were equally likely to receive information from friends, family members, support groups and educational professionals.

The researchers urge service providers to increase awareness about autism and its available services among Latino families so that the children can get the help they need.