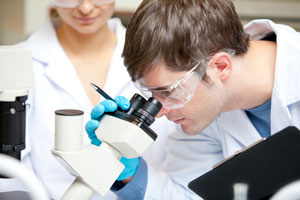 There’s a common conception that people with autism gravitate to more technological careers, such as computer programming or engineering. A few small studies support the trend, but there is little systematic evidence available to back it up.

A new large-scale study, published 1 November in the Journal of Autism and Developmental Disorders, provides the first broad support for this idea.

Researchers analyzed data from 11,000 high school students with a variety of developmental disabilities as part of the National Longitudinal Transition Study-2, which gathered information on students as they moved from high school to college.

All the students in the study received special education services in high schooland about 1,100 are diagnosed with autism. The researchers collected the data through parent and teacher surveys as well as in-person interviews and student surveys.

Among those who do enroll in college, however, 34 percent of students with autism choose to major in science and technology. That number is higher than for any of the other groups, and higher than the 22 percent average in the general college population.

One possible explanation for this bias is that people with autism are good at systemizing — analyzing information according to a set of rules — a valuable skill in science.

The findings follow smaller studies suggesting that autism rates are higher among families of mathematicians and engineers. For example, one well-publicized study found that women scientists in Silicon Valley, California’s technological mecca, are more likely than other women to have a child with autism.

A survey of about 1,000 Princeton University students published in January found that those who have a sibling with autism are more likely than other students to study technical subjects. (On the flip side, students who say they have a family member with bipolar disorder, depression or substance abuse issues are more likely to study the humanities.)

The new study is large, and the researchers analyzed data from colleges all over the country rather than any one institution.

However, one of the potential drawbacks is that it focuses on children who were eligible to receive special education services. It’s not clear whether the findings would generalize to teens with autism who don’t receive this help.

The findings are part of a growing literature on the welfare of adults with autism. The researchers point out that as more children with autism get early intensive therapy, more of them are likely to go on to college. It will be important to understand what early factors predict college success, so that educators can help teens with autism move into adulthood.