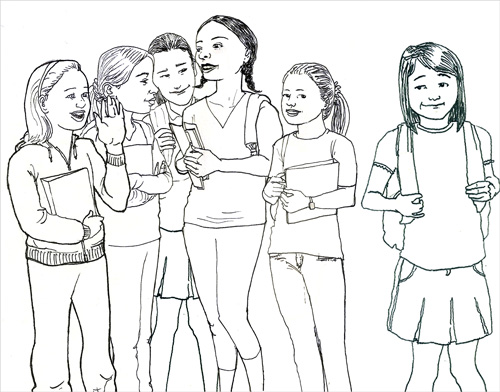 Middle-school girls can be mean and unforgiving, creating cliques that may appear impenetrable to classmates looking for friends. For girls with autism who have trouble navigating social situations, this can be a particularly harsh environment.

Given the right information, though, even cliquey eighth-graders can learn to be empathetic. Middle-school girls who completed an eight-week awareness program about autism, described 10 May in the Journal of Autism and Developmental Disorders, became much kinder toward their classmates with autism, saying they would invite them to parties, movies and study sessions, for example.

Girls who completed the program also perceived people with autism in a more positive light than they had before. The lessons seemed to affect the school overall, in fact, as even those who didn’t participate in the program reported that they viewed girls with autism with more empathy.

The study is one of several over the past decade to test this premise, but is the first to raise awareness about girls with autism.

Girls with autism who have average to high intelligence may go undiagnosed because the diagnostic tests for the disorder are designed primarily for boys. For instance, girls with high-functioning autism may show an interest in meeting people, but lack the social wherewithal to cement a friendship.

In elementary school, some of these girls may fit in socially by mimicking their classmates. By middle school, this strategy usually falters as relationships grow in complexity.

The researchers invited 600 middle-schoolers at an all-girls Catholic school in a middle-class Australian suburb to take part in the program.

About 45 percent, or 273 students, agreed. Only 48 students, all in the eighth grade, completed the program, a series of 50-minute weekly sessions. The remaining 225 did not participate so that the researchers could test any spillover effect of the program.

As expected, the students who finished the program knew significantly more about autism than they did at the beginning. They understood, for example, that people with autism may struggle to grasp others’ perspectives or feelings, and may sometimes appear rude.

The instructor helped the students empathize with girls who have autism by explaining that they need support and understanding just like any other student might. In one session, students discussed how they would interact with a girl who has autism and practiced protecting her from a bully.

The girls who completed the program were still empathetic at a follow-up three months later, based on the adjectives they used to describe autism and how similar they said people with autism are to themselves.

About half said they had discussed the program with their classmates. This may explain why the students who didn’t participate in the program also seemed more empathetic than they had before. However, this did not change their knowledge of autism or their behavior: Some still said they would not spend time with classmates who have autism outside of school.