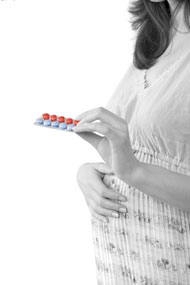 A number of studies have suggested that the use of antidepressants or the anti-seizure medication valproate by pregnant women raises the risk of autism in their children. Two new large-scale studies published in April, encompassing 47,700 and 650,000 children respectively, confirm this risk.

Because half of pregnancies in the U.S. are unplanned, it’s important for women of childbearing age to have accurate information on the risks associated with these medications.

The valproate study, published 24 April in the Journal of the American Medical Association, is the largest to date to examine the link between autism and prenatal exposure to valproate.

Researchers at Aarhus University Hospital in Denmark analyzed data from the more than 655,615 children born in the country from 1996 to 2006. They used national records to determine that 5,437 children were subsequently diagnosed with autism, including 2,067 with the more severe autistic disorder, and that 508 had been exposed to valproate in utero.

These rates are a bit lower than in a 2008 study, which found a sevenfold increase in risk linked to valproate, likely due to the new study’s much larger size. (The 2008 study analyzed 632 children, about half of them born to women who took the drug during pregnancy.)

The researchers controlled for other factors associated with an increased risk of autism, such as parents’ ages and psychiatric conditions, birth weight, gender and congenital malformations.

Prenatal exposure to valproate is well known to trigger autism-like symptoms in animals. Indeed, valproate treatment is often used to create a rat model of the disorder.

The second study, published 19 April in the British Medical Journal, analyzed data on a subset of young people living in Stockholm County in Sweden between 2001 and 2007. The study included 4,429 children with autism and 43,277 controls, aged 0 to 17 years.

Taking antidepressants during pregnancy also doubles the risk of having a child with autism, again limited to children without intellectual disability. The rates are similar for both selective serotonin reuptake inhibitors such as fluoxetine (Prozac) and the older tricyclic antidepressants, including imipramine (Tofranil).

The researchers say it’s impossible to separate out the risk due to antidepressant use from the risk due to depression itself, which makes it especially difficult for women to decide whether to take the drugs during pregnancy. The results “present a major dilemma in relation to clinical advice to pregnant women with depression,” they write.

If some of the risk is linked to depression itself, it’s possible that antidepressants would actually help. But a smaller study of 300 women who had taken antidepressants during pregnancy, published in 2011, tied increased risk specifically to antidepressant use.

The researchers caution that a diagnosis of depression in their study relied on records from psychiatric specialist care and therefore is likely to represent the most severe cases. (Most people suffering from depression don’t seek help.)

Given the growing use of antidepressants over the past 20 years, some people have suggested that these drugs contribute to the rising prevalence of autism. However, the researchers say antidepressant use would account for less than one percent of autism cases.