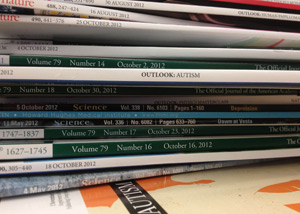 Ten years ago, the Archives of General Psychiatry published approximately three articles on autism a year. Now the November issue itself has three such papers, Geraldine Dawson, chief science officer of the research and advocacy organization Autism Speaks, points out in an editorial in the same issue.

The trio of papers, which range in topic from brain imaging to immune activation and environmental risk factors, reflect a rapid rise, beginning in 2000, in the number of autism publications overall.

Not surprisingly, rising publication rates follow growth of funds available for autism research. In 2000, the National Institutes of Health designated $50 million in research funding for autism from as part of the Children’s Health Act. This year, the institute will spend $169 million directly on autism research. Though funding has grown, it’s still a small percentage — about 0.55 percent — of the overall $30.86 billion budget.

Funding from private sources has grown as well, including from Autism Speaks and the Simons Foundation, SFARI.org’s parent organization. In 2010, a combination of public and private organizations gave out a total of $408 million for autism research, with roughly 80 percent coming from federal sources.

In addition to funding and research, autism prevalence is rising as well. It’s not yet clear whether the numbers reflect growing awareness of the disorder or a true increase in autism’s incidence.

Regardless, it means more people need help. Over the past six years, prevalence has risen by 80 percent compared with a 43 percent increase in federal funding. As Dawson notes, that means annual funding per person with the disorder has fallen from an estimated $62 in 2007 to $47.50.