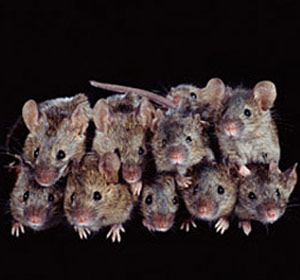 Mice may all look alike but, like people, they carry different combinations of background genes that may interact with a given mutated gene. They also have variable exposures in utero and experiences after birth that may influence the expression of genes. Even if all of these variables were the same, no two mice, like no two people, will respond to a given situation in exactly the same way.

And yet, most studies are designed as if mice were all the same.

Researchers typically use only one ‘cohort,’ a group of about three dozen mice, for a given set of experiments. In the handful of studies that have used more than one cohort — the latest of which came out 9 May in the Journal of Neuroscience — sometimes the results hold up, and sometimes they don’t.

By contrast, consider a 2007 study of mice lacking the receptor for vasopressin, the ‘fight or flight’ hormone linked to autism. The researchers, led by Jacqueline Crawley, made five cohorts of mice. They found that social behavior is abnormal in one group but normal in the other four.

“From my reading of the literature, the field has been seriously muddied by the current lack of required standards for at least one replication before publication — and before press releases,” says Crawley, chief of behavioral neuroscience at the National Institute of Mental Health, and lead investigator of the new report.

The report gives a perfect example of the many flavors of variability in mouse models. Crawley and her colleagues looked at mice carrying a mutation in one copy of SHANK3, a gene that’s strongly linked to autism.

The mice debuted in 2010 (with Crawley as one of the authors), and the new study validates some previous findings. For example, it confirms that these mice show normal social behaviors as adults and mild deficits during juvenile social interactions.

The new study also looked at a wide range of behaviors in three independent cohorts. The researchers found that, although object recognition and motor performance are consistent among the groups, repetitive self-grooming, abnormal ultrasonic vocalizations and water-maze learning are not.

Addressing variability can’t stop with adding cohorts. The precise nature of a mutation matters, as does the strain of the mice used. Mice carrying a glitch in a different piece of SHANK3, for example, show severe social problems and compulsive grooming. And the same NLGN3 mutation causes social deficits in one strain of mice but not in another.

Last year, a study of six mouse strains lacking the gene for fragile X syndrome, found that each strain has its own distinct set of abnormal behaviors.

It’s pretty clear, then, that mouse studies need to be repeated — in multiple cohorts and strains. Crawley’s lab routinely creates two cohorts of mice for each experiment. If the results don’t match, the researchers make a third.