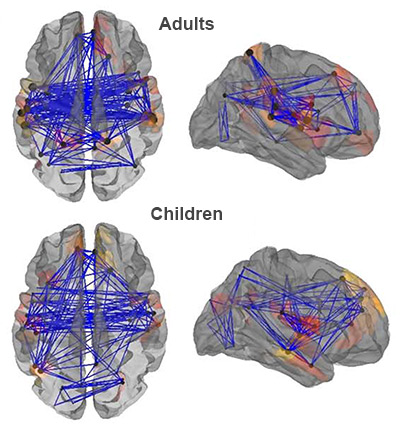 The ‘rich club,’ a higher-order brain network, is anatomically similar but functionally richer in adults compared with children, according to a study published 5 February in PLoS One.

Rich club is a general term for a network with regions, or nodes, that are deeply interconnected. The new study confirms that the network is aptly named, with a robust presence throughout several neural systems, including the default mode network — which is active when the brain is awake but at rest.

Researchers are studying the rich club in order to understand how the brain’s function relates to its structure. They’ve found that the network works like a highway system, carrying a large volume of information as it connects one region of the brain to another and assisting with complex cognitive tasks.

There is some evidence that people with autism have problems with neural connectivity. Studies like this one give researchers the opportunity to learn more about normal brain development and connectivity as a baseline for comparison in autism research.

The findings suggest that certain functional rich-club connections are present in childhood, and that they may strengthen with age, although a study that tracks the same individuals’ brains over time is needed to confirm these results.

The researchers examined the brains of 14 adults between 24 and 35 years of age and 15 children aged 7 to 11 years. To view both structural and functional pathways during times of rest, they used functional magnetic resonance imaging (fMRI) as well as diffusion-weighted MRI — a technique that uses patterns of water diffusion to map connectivity.

They found that rich-club pathways run throughout both sides of the brain and enervate all of the major regions already associated with the structural connectome, a map of neural connections. The rich-club network’s structure appears to be stable across development, with children and adults showing similar organization throughout the brain.

Its functional organization largely overlaps with structural regions. And the fact that it is found in several distinct brain systems hints at its importance in neural communication.

In both adults and children, when the brain is at rest, neural impulses tend to stay within a single system, with little or no crosstalk among systems, the study found. These results are in line with those from previous studies.

In adults, some rich-club nodes are both more individually robust and more interconnected than they are in children. For instance, the insular cortex, which is associated with self-awareness, appears to become richer, or denser, with age.

Other nodes — such as the supramarginal cortex, an area associated with language perception, and the superior parietal cortex, which is involved with spatial orientation — are not part of the childhood functional rich club but may become richer later in life.

Connections between two regions, the somatosensory and the cingulo-opercular systems, are also stronger in adults than in children. The finding suggests that the rich club may carry more information across these regions with age. These sorts of changes may result from the greater demands for flexible and complex cognition in adulthood.