On Sunday afternoon, nearly 1,700 people filled the Minskoff Theater in New York City to capacity to watch the celebrated musical The Lion King. The lights dimmed and a parade of life-sized animal puppets danced down the aisles, just as always. But this time, there was a palpable thrill of uncertainty in the air. For the first time, about 500 members of the audience were children with autism.

Sunday’s show was the first-ever autism-friendly Broadway production hosted by the Theatre Development Fund (TDF), a nonprofit organization that aims to make theater accessible to all. “It was uncharted territory,” said Victoria Bailey, the organization’s executive director.

The evening was a first for most people involved, from the producers, ushers, cast and crew, to the children with autism and their siblings, many of whom had never been to a live show before. But one thing was abundantly clear: Everyone was prepared.

Because many children with autism have sensory sensitivities, the show’s producers made a few modifications: They lowered the volume, eliminated strobe lights and smoke, and subdued any sudden noises such as lion roars. Still, this was “the full-out Lion King,” said Bailey.

“The kids are who they are. We needed to train everyone else for, well, this,” Bleiweiss said before the show, glancing at a child running across the stage.

For example, the theater designated two ‘quiet spaces,’ stocked with bean-bag chairs, weighted blankets and headphones, that the children could retreat to if the show became too much for them. Another space included a streaming video of the show.

Before the show, 44 volunteers handed out calming toys, earplugs and support materials. These included a visual cue card based on the popular “Hakuna Matata” song, listing steps the children could take to stay calm, and another to help the children identify the actors based on the cartoon characters in the movie version of The Lion King. Parents could also prepare their children with downloadable social stories, teaching tools that help children cope with new experiences. 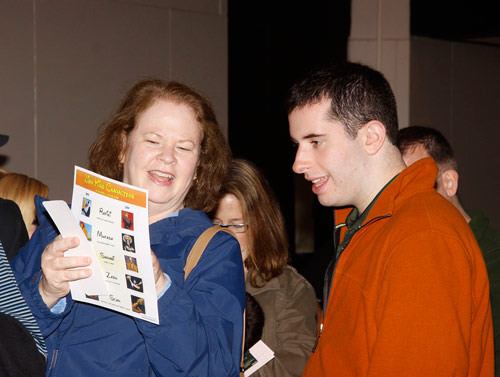 As the show began and a giant elephant walked down the aisle, a hum of excitement ran through the crowd. Although this was one of the scenes the organizers had been most concerned about, it seemed to be a highlight for the children. A girl audibly told her father how happy she was that they hadn’t cut this scene — she had seen the original production a few years ago — and a 5-year-old later said that this was his favorite part.

A 7-year-old who had watched the movie had been worried that he’d be frightened by a fight scene near the end, and would have to leave, “but it was fun!” he said, shouting out the word ‘fun.’ He later gave the day a ‘thumbs-up.’

Many of the parents were equally appreciative. One mother called the theater a “comfortable space.” Another said it was a relief knowing that if the kids made noise or needed to leave during the show, it was okay. “Everyone is in the same boat,” shesaid.

“The parents spend so much energy interacting with the rest of the world on behalf of their children,” Bailey noted. “We didn’t realize the extent to which a break from that would be so restorative to them.”

Bailey says she hopes to create a new audience of theatergoers, among both the children with autism and their siblings.

The show seemed to create at least one new admirer of theater. “So you enjoyed it?” I asked one 7-year-old boy — to which he responded, “Is there going to be another?”