The culture of gender 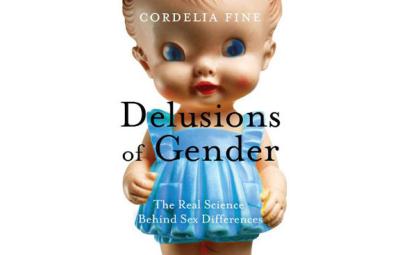 As a woman with decent social skills and a long-held love of math and science, I’ve always raised my eyebrows when reading about boy brains versus girl brains. The notion that ‘hardwired’ differences underlie the paucity of women in science — and business, and politics — has gained traction in the past few years.

The gist of her argument is that culture — from the way we talk to babies when they’re still in the womb, to the colored bonnets we thrust upon their heads the day they come out — strongly affects how children understand their gender. She shows that despite its obvious influence, culture is virtually ignored by studies claiming biological differences in the brains and in the abilities and behaviors of boys and girls.

It’s a powerful argument — and Fine’s wit and charming asides keep it from feeling vitriolic. The book has given me heavy ammo for cocktail-party debates about gender inequality. But it also carries a subtler message for scientists investigating autism (or anything else): wide-sweeping theories, right or wrong, are important, but when it comes to data, the devil is in the details.

Over the past decade, Simon Baron-Cohen, director of the Autism Research Centre in Cambridge, UK, has argued that women, on average, are better ’empathizers’ than men, and men are better ‘systemizers’ — obscurely defined as the ability to “analyze, explore and construct a system.” He claims the differences appear mostly because, in utero, baby boy brains are exposed to a surge of testosterone, and baby girl brains are not.

This hormonal difference, Baron-Cohen has written again and again, is driving the disproportionately low numbers of women in math and science professions. As he writes in his 2003 book, The Essential Difference: “People with the female brain make the most wonderful counsellors, primary-school teachers, nurses, carers, therapists, social workers, mediators, group facilitators or personnel staff.”

It’s this application of the theory that Fine finds dangerous, and it makes me a bit hot under the collar, too.

She has little to say, though, about how Baron-Cohen’s ideas may or may not apply to people with autism.

Baron-Cohen’s famous ‘fetal androgen theory’ of autism — as outlined in a 2005 commentary in Science — says that the disorder, which crops up in four times as many boys as girls, is the result of an ‘extreme male brain‘ — made so, somehow, by too much testosterone in the womb.

Even though I don’t think Baron-Cohen’s theory underlies societal gender inequalities, it could plausibly explain the features of autism. People with the disorder are known for their sharp attention to detail and a need for order. And they’re not very good at empathizing: they have trouble gauging facial expressions and inferring what others are thinking.

Many autism experts have raised doubts about the theory, for the same reason that Fine did: he hasn’t come up with any direct evidence showing that fetal testosterone affects behavior.

Fine notes that many of the correlations from amniotic testosterone studies don’t stand up to statistical scrutiny. What’s more, most of the studies are based on questionnaires (designed by Baron-Cohen’s group) filled out by parents, who are of course subject to social biases.

Baron-Cohen is a legend in the autism field, and his work has contributed a great deal to our understanding of the complex disorder. His testosterone theory may very well be correct.

No one, and certainly not Fine, would question that there are biological differences between men and women. There are also non-refutable differences in the size, shape and organization of our brains. And — although the data are extremely weak — there may even be differences in the fetal brain’s exposure to hormones.

Fine’s beef (and mine) is not with these ideas — which are, ultimately, empirical. It’s in the unfounded and pernicious leap that these differences lead to certain thinking styles, abilities or professions. The book, I hope, will push more people to look before they leap.

Virginia Hughes is a freelance journalist based in Brooklyn, New York. She earned an M.A. in science writing from Johns Hopkins University in 2006, and has written for Discover, NPR.org and Nature. Visit her website at virginiahughes.com.