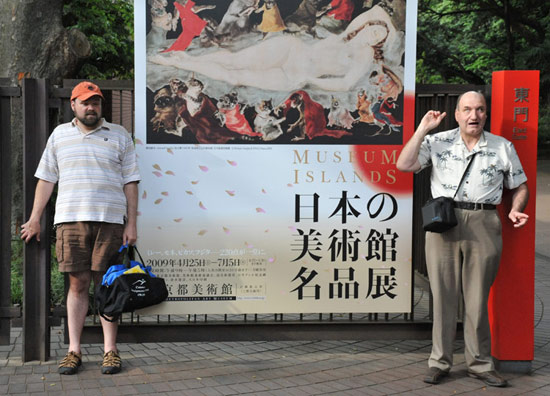 Hollywood loves a road trip. From It Happened One Night to The Hangover, the journey of two or more mismatched and often maladjusted protagonists is always good for laughs, and usually a few tears along the way.

Gerardine Wurzburg’s new documentary, Wretches & Jabberers, tracks the adventures of two middle-aged men with autism — Larry Bissonnette, 52, and Tracy Thresher, 42 — as the two travel to Sri Lanka, Japan and Finland on a quest to change attitudes about their disorder. And the film fits comfortably within the road-trip genre even if the two heroes are unlikely film stars.

Wretches & Jabberers is entertaining, informative and deeply moving. It’s also a bit repetitive, but then, so are most journeys. The charm is in the people that you meet, and the things that you discover about yourself, along the way.

Both men were released from what Thresher calls the “prison” of nonverbal autism by learning to use assisted communication devices. After a long, laborious struggle to master the technology, which is not shown in the film, the two met and joined forces to advocate for people like themselves on a crusade they term the “Intelligence Parade.”

Bissonnette is an artist and is shown at home in Vermont painting. He is the light-hearted joker of the two, whereas Thresher is more serious and — as soon becomes clear in the film — on a spiritual quest to understand his purpose in life.

One of the most powerful sequences in the film shows the two visiting a Buddhist temple in Sri Lanka, where Bissonnette has a meltdown because visitors need to take off their shoes and he cannot abide bare feet. Thresher challenges him to adopt a more Buddhist perspective, typing, “I wish you could have relaxed and enjoyed yourself.”

On their journey, the two meet young people with autism who live mostly solitary existences in cultures in which autism remains a kind of life-without-parole sentence within the walls of family homes or institutions. But like Bissonnette and Thresher, the young people — Naoki In Japan, Henna and Antti in Finland, and Chammi in Sri Lanka — have learned to communicate via keyboard. And they are heartbreakingly eager to communicate their thoughts and feelings about their lives with people who will understand the challenges they face — and their dreams for themselves.

“Very like us in their penchant for language as a loud spear for bursting bubbles of backwards thinking about people who don’t get to speak normally,” Bissonnette types.

The emotional fluidity and expressiveness of all of these individuals will come as a shock to viewers accustomed to think of people with autism as logic-locked automatons. Similarly, the friendship between Bissonnette and Thresher — the way that they tease and support each other — shows that individuals with the disorder are capable of deep feeling: no surprise to those who actually know people with autism, but perhaps to those who still believe that they are incapable of empathy.

There’s even a romantic subplot as Thresher is clearly smitten by Henna, a young Finnish woman with bright orange hair, and invites her to visit him in Vermont. In the classic manner of shy young women, she responds, “I have to ask my mother.”

Many scientists are skeptical about the use of assisted communication. Some have said that facilitators like Harvey Lavoy and Pascal Cheng, who accompany Bissonnette and Thresher on the journey and have worked with them for many years, are actually doing the typing.

The film — and even more so, a live New York Times-sponsored event on March 30th with Thresher, Bissonnette and director Wurzburg — proves that this is not the case. As the two men typed their responses, the individual letters and words appeared on a screen above them. It was a slow process, and members of the audience sometimes got the gist and began applauding — and in Bissonnette’s case, laughing — even before a robotic voice read out the complete response.

When one member of the audience asked about the controversy surrounding the use of the devices, Thresher responded, “With the training and support we have gotten and lots of hard work, we type our own words. Do you really think Pascal [Bissonnette’s assistant] could be so witty?”

The film is a must-see for anyone who wants to understand autism from the perspective of those who live with it. By the time the credits roll, Bissonnette and Thresher feel less like odd strangers met along the road than friends you hope to meet again.