In the summer of 1917, an Austrian doctor named Julius Wagner-Jauregg gave a man with advanced symptoms of syphilis, including psychotic episodes, a very peculiar treatment: malaria.

The parasitic infection causes fever, and Wagner-Jauregg had a theory that fever treatment, or ‘pyrotherapy,’ could cure psychosis. The doctor injected the man with blood drawn from a soldier with malaria. Within weeks, as expected, this brought on episodes of fever. After the sixth fever, the man’s psychotic fits ended, and he eventually recovered completely from both syphilis and malaria. Wagner-Jauregg repeated the experiment on nine more men with psychosis, and six of them improved.

This marked the first time that scientists had identified a physical treatment for a mental disorder — a feat that earned Wagner-Jauregg a Nobel Prize. To this day, scientists don’t know the mechanisms underlying his success.

Despite a century-long history, we rarely hear about the link between the immune system and mental illness. But the science behind it is rich and varied — from massive epidemiological studies of twins and pregnant women, to the screening of immune molecules in amniotic fluid and postmortem studies of brain inflammation.

For the non-expert, this field can be more intimidating than a box of jumbled Christmas decorations. In his new book, Infectious Behavior: Brain-Immune Connections in Autism, Schizophrenia, and Depression, biologist Paul Patterson nimbly untangles the strings of lights.

For the past decade, Patterson, professor of biology at the California Institute of Technology, has conducted animal studies to tease out the molecular mechanisms underlying immune links to autism.

For example, he found that when pregnant mice receive a mock infection, their pups later show an array of abnormal behaviors. The book sometimes explores his own work, but mostly focuses on the large body of indirect evidence supporting the idea of an immune component to autism, schizophrenia and other psychiatric disorders.

The most famous data for this link come from some six decades of epidemiological studies showing that when a pregnant woman gets a viral infection, it substantially increases her risk of having a child with schizophrenia or autism. 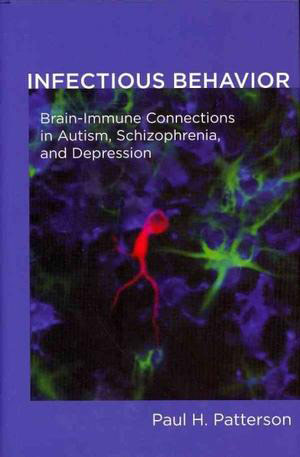 There are dozens of other intriguing associations. Genetic studies, for example, have tied genes in the major histocompatibility complex — a molecule that guides immune reactions — to both schizophrenia and autism. Some individuals with autism carry abnormal profiles of immune molecules in their blood. Others, according to postmortem studies, show activated immune cells in the brain.

Patterson also highlights a rarely discussed aspect of autism twin studies. When an identical twin has autism, the likelihood that the other twin also has it is high, around 80 percent. The so-called concordance rate of fraternal twins, who share only half of their genes, is around 30 percent. Because both kinds of twins share the same womb, most scientists see this difference as evidence that autism is a strongly genetic disorder.

But the fetal environment is actually not the same for fraternal twins and identical twins: Fraternal twins have separate placentas, but identical twins usually share one. Patterson also points out that whereas the fraternal twin concordance rate is 30 percent, for non-twin siblings — who also share half their DNA, but do not share a womb — it’s only about 15 percent.

Patterson lays out this complicated work clearly and concisely, with little editorializing. But anyone who has heard him give a talk knows his primary motivation for writing the book: He’s tired of all the attention in the autism community going toward genetics.

As he notes briefly in the introduction: “I believe that [immune research] is not yet fully appreciated by the biomedical community, overshadowed as it is, in both publicity and funding, by genetic approaches to these diseases.”

He’s not wrong. According to the most recent government report, some $64 million in public and private research funds went toward autism genetics in 2009, compared with $27 million for research on environmental causes and gene-environment interactions.

I wish Patterson had discussed the question of why, with such a long history and so many interesting scientific leads, immune research in autism has been largely ignored.

It could be because genomics technologies, which have evolved rapidly over the past decade, draw research dollars away from other subfields. Or it could be that the anti-vaccine ruckus has made scientists gun-shy of anything even remotely related to immunity.

But it could also be that the bulk of research on immune links to autism is a jumble of intriguing anecdotes and statistical correlations. To gain a better handle on the mechanisms at work, the field needs more scientists like Patterson who test these associations on animal models.

If for no other reason, it’s worth studying because unlike genetic influences, environmentally influenced risk factors can potentially be avoided.

Virginia Hughes is a freelance journalist based in Brooklyn, New York. She earned an M.A. in science writing from Johns Hopkins University in 2006, and has written for Nature, New Scientist, Popular Science and Scientific American.