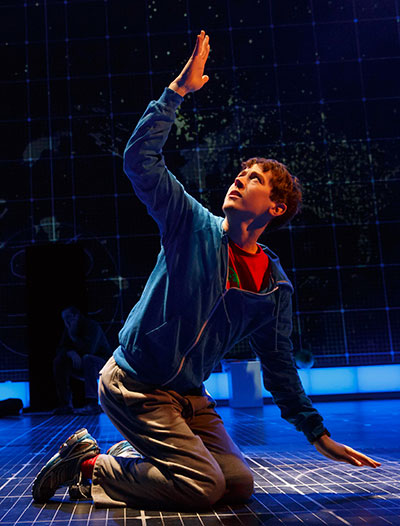 Christopher Boone likes math, outer space and spending time alone. He doesn’t like the colors yellow or brown, he has difficulty understanding metaphors and he breaks down into hysterics at the slightest touch from another person.

The 15-year-old boy is peculiar, intelligent and the protagonist in the acclaimed Broadway play “The Curious Incident of the Dog in the Night-Time.” The show, adapted from Mark Haddon’s 2003 best-selling novel of the same name, gives theatergoers dazzling insight into how it feels to navigate the world the way Christopher does.

The play never mentions Christopher’s condition, though he is widely assumed to have Asperger syndrome. Haddon insists the story is not about someone on the spectrum, but rather “about difference, about being an outsider, about seeing the world in a surprising and revealing way.”

When the show opens, we see Christopher in his neighbor’s garden shortly after midnight. He’s huddling over a white dog that lies dead with a pitchfork protruding from its paunch. An irate woman emerges, accusing Christopher of murdering her beloved companion. A chaotic blitz of strobe lights and deafening sounds ensues — the first sign that this theater experience is likely to be unlike any other.

The tale, narrated at times by Christopher and at others by his special-education teacher, Siobhan, follows the boy on his hunt to uncover the dog’s real killer. Along the way, we learn about his dysfunctional family, his savant-like math abilities and his struggle to interact with others.

The set itself — essentially the inside of a black box marked with white gridlines — seems to reflect the inner workings of Christopher’s mind. The surfaces serve as a chalkboard of sorts, upon which Christopher scrawls notes as he tries to crack the case. But the box comes blazing to life with colored lights as the action unfolds.

For instance, when Christopher is forced to navigate unfamiliar terrain without a map, each footstep lights up to eventually reveal the logic behind his circuitous route. And when Christopher’s interactions with the people around him become overwhelming, the stage explodes into a cacophonous array of light and distorted digital screech-like sounds — enough to strain the senses of any audience member.

The play immerses you in Christopher’s experience of the world in a way no book can. For instance, in the novel, Christopher reacts to his angry neighbor’s screaming accusations by covering his ears, closing his eyes and hunching on the ground with his head on the grass. The play’s version of Christopher does the same, but with the addition of light and sound, viewers get a richer sense of how that confrontation feels for him.

Christopher may not have autism, but his story still gave me some idea of what life might be like for someone with the disorder. We need more stories like it because we can’t expect the experiences of any one person with the disorder — fictitious or not — to reflect the full spectrum of experiences.