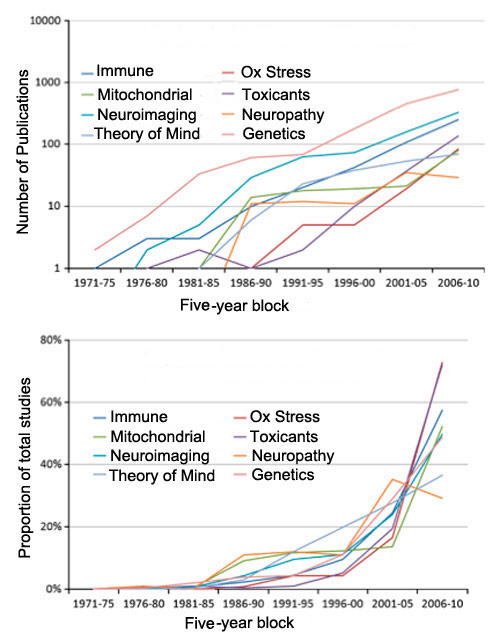 That genetics makes up the largest portion of autism research is probably no surprise. What may be unexpected news is that a number of other subfields — including immune function, oxidative stress and toxin exposures — are growing even faster, according to a new meta-analysis published in Molecular Psychiatry.

By contrast, the number of papers published on theory of mind and neuropathology has slowed.

Genetics is the biggest winner by far: The number of papers published in genetics (pink) is almost equal to all other areas combined and is 2.4 times that of the next largest subfield, neuroimaging (turquoise). The increase in genetics and neuroimaging research is likely to be the result of the rapid advances in technologies in these fields. The drop in neuropathology (orange) research may be due to the lack of available postmortem tissue.

The analysis is biased, of course, based on the categories the scientists picked to analyze. In this case, they focused specifically on what they call “physiological abnormalities” related to autism.

But they did not search for studies related to more molecular topics, such as signaling through synapses, the junctions between neurons, or neural circuits, both growing areas of study in autism.

According to the analysis, research on the immune system’s role in autism began growing in the 1990s, while research on oxidative stress and toxic exposure picked up speed over just the past ten years. The number of studies on mitochondrial dysfunction showed the most recent bump, increasing significantly from 2006 to 2010 after a relatively flat period.

It’s not clear why research on theory of mind deficits in autism has begun to fall. In general, autism research funding is focusing more specifically on causes of autism, including genetic and environmental factors, rather than on its manifestations.

According to a 2010 analysis of National Institutes of Health funding for autism research in 2009, led by the Interagency Autism Coordinating Committee, the largest portion of research funding was directed at identifying the cause of the disorder. Within that area, research identifying genetic factors for autism garnered 50 percent of funding.

Genetics is likely to retain its status as a heavy hitter, but judging from this analysis, the newer players may also soon grab a significant piece of the pie.