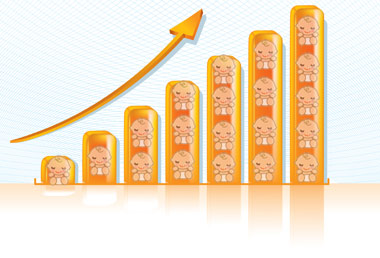 Last month, the Centers for Disease Control and Prevention released an attention-grabbing report citing a rapid rise in autism rates, from 1 in 150 children in 2007 to 1 in 88 children today. The startling jump generated a major debate: Does it point to a true increase in prevalence, perhaps due to environmental factors, or simply reflect a growing awareness and thus diagnosis of the disorder?

The question is a complex one that will likely require more research to answer, but previous studies have shown just how profound an effect social factors can have on autism rates.

Changes to the way autism is diagnosed can also have a major effect. Bearman and others have focused in part on the state of California, where autism rates grew more than six-fold from 1987 to 2003.

His group found that more than one in four of the children with autism today would not have been diagnosed with the disorder in 1993. The change is due to changes in the diagnostic criteria for autism introduced in 1994.

And Irva Hertz-Picciotto and her collaborators at the University of California, Davis, have shown that a shift toward earlier diagnosis — from an average of 5.9 years for a child born in 1992 to 3.8 years for one born in 2000 — also accounts for some of the rise in rates in that state.

However, as Thomas Insel, director of the National Institute of Mental Health, notes in a blog about the CDC report, better awareness and detection explain only a portion of the rising rates in California.

One way to try to sort out the influence of environmental versus social factors is to look at what shape the rising rates take, and then look for potential variables that follow the same pattern.

For example, Bearman’s group found that the likelihood that a child would be diagnosed with autism rose for each subsequent year of birth: Those born in 2003 have 16.6 times the odds of an autism diagnosis compared with those born in 1992. The effect was roughly linear and most pronounced in those with high-functioning autism.

Bearman points out that any theories explaining the growing prevalence would need to fit that linear rise, as well as the skew towards higher-functioning individuals.

According to the researchers, growing social awareness is one such candidate, but environmental factors are not. As noted in a recent SFARI.org piece on Bearman’s findings:

Determining what’s driving the change in rates will be important in figuring out where to direct research and intervention efforts.

If there is an increase in the number affected, then we need to find the causal factors to bend the curve. Analogous increases in food allergies, asthma, and Type 1 diabetes have provoked an aggressive search for environmental causes. If the number of children with [autism spectrum disorders] has not changed, but we are diagnosing and serving 12-fold more of them over the past two decades, then we need to focus on better diagnosis and treatments rather than looking for new environmental factors driving the precipitous increase.

“Science can resolve this dilemma,” Insel also writes. “But the methods to examine this question as well as the answers will be complex.”