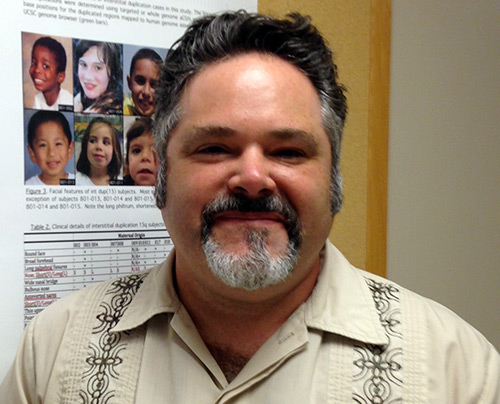 Studying brain disorders has never been easy. Apart from postmortem brain tissue, a rare resource with some limitations, most options rely on trying to grow neurons in a dish.

In the past few years, researchers have tried taking skin or hair cells from individuals with a particular disorder and coaxing the cells to become neurons. Taking out chunks of skin or hair is painful, however, and especially tricky in children with autism symptoms.

As an alternative, Lawrence Reiter’s team at the University of Tennessee has developed a method to make neurons from dental pulp, found within discarded teeth. Because young children regularly — and adults sometimes — shed teeth, Reiter has easily found willing participants.

Reiter says his goal is to generate neurons from individuals who have neurological disorders with known genetic causes, such as Angelman syndrome or dup15q syndrome. Both of these disorders are the result of changes to the 15q11.2-q13 chromosomal region, which is also linked to autism. Much of the research on this region has focused on a gene called UBE3A.

Individuals with dup15q syndrome carry extra copies of the region, and have autism-like symptoms and severe seizures that may cause sudden death. People with Angelman syndrome lack the maternal copy of the 15q11.2-q13 region, and show developmental delay, seizures and a characteristically happy disposition.

Reiter is using neurons made from dental pulp to look at the pattern of gene expression in people with these two disorders as well as a range of others. He presented preliminary data from this work 15 August, at a conference in Boston hosted by the Dup15q Alliance and the Angelman Syndrome Foundation.

SFARI.org: What question are you using dental cells to answer?

Lawrence Reiter: The number one thing we’re trying to do is to look for consistent differences in gene expression among syndromes in which autism is common. The syndrome-specific gene expression should drop out when we compare Smith-Magenis syndrome (a disorder characterized by intellectual disability) with tuberous sclerosis (an autism-related disorder) or dup15q, for example. The only things left will be those networks that are directly related to autism, meaning that the same genes show expression changes in all the syndromes.

SFARI.org: How do you collect dental pulp?

LR: We get a genetics report from someone to validate the class of mutation or deletion —whether it’s Smith-Magenis syndrome, dup15q syndrome or Angelman syndrome — and then we send them a tube and a consent form. The kit also includes an autism-testing questionnaire, called the Social Responsiveness Scale, which is a way to remotely test for autism features.

Whenever the tooth falls out on its own, the participant sticks it in the tube and sends it in our packaging back to us. We grow stem cells from the pulp within 24 to 48 hours.

SFARI.org: So you are collecting teeth only from children?

LR: Not necessarily. We’ve actually received a couple of adult teeth by working with a dentist. On occasion, a tooth will have to be extracted, so it’s possible.

SFARI.org: Why dental pulp, as opposed to skin or blood samples?

A parent at a meeting once thanked me for finding a noninvasive way to take specimens from her children. It allowed her to contribute to research and she was more willing to do so because it’s noninvasive.

SFARI.org: Once you have the stem cells from pulp, what next?

LR: There’s a whole list of cell types that people have used dental stem cells for. The focus has traditionally been on restorative dentistry, but I saw them as a new way to access neurons from individuals with neurological disorders. There were just a few studies on making neurons out of dental pulp stem cells, but enough to convince me that it was worth the effort.

Hopefully our work will show that gene expression studies from these cells are doable, and that we can collect a lot more specimens per syndrome using this method than with skin biopsies.

SFARI.org: How many teeth do you have so far?

LR: We probably have close to 45 now. The majority are from children with dup15q and Angelman syndrome, but I’ve taken all comers. I’ve collected teeth from children with Smith-Magenis syndrome, Prader-Willi syndrome [caused by a deletion of the paternal copy of 15q11.2-q13], 22q11.2 deletion syndrome [which ups the risk of schizophrenia] and tuberous sclerosis.

SFARI.org: What have you found so far?

LR: We were surprised to find that there are 123 genes that are regulated differently in dup15q syndrome than in controls and that two-thirds of those are down-regulated. We were also happy to see that gene expression follows copy number for Angelman syndrome and dup15q,meaning that genes in the 15q11.2-q13 region are expressed at higher levels in the duplication and lower levels in the deletion.

For dup15q syndrome, we saw elevated gene expression of both UBE3A and HERC2, which is another gene in the duplicated region. But the proteins don’t care about that: UBE3A protein levels go up, and HERC2 protein levels go down in the cells. That’s a significant finding because I think people have somewhat ignored HERC2 in the phenotype of the syndrome.

The other finding is that deletion of the Angelman syndrome region does not change the expression of many genes. That is consistent with the idea that a single gene, UBE3A, contributes to the phenotype.

SFARI.org: What are your next steps?

LR: We are starting to investigate the connections among these neurons in culture. We want to do that using molecular tools, and hopefully we’ll be able to visualize these changes. So when we talk about various treatments, we want to put these onto the cells and show that Angelman cells, for example, fire more slowly than control cells or don’t fire as well.