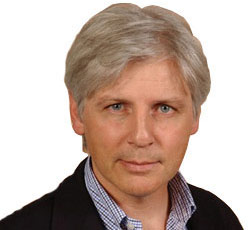 In March, the Centers for Disease Control and Prevention (CDC) released what on the surface seemed to be an alarming report. It found that the rate of autism has increased 23 percent — from 1 in 110 children to 1 in 88 — in the past two years, and a whopping 78 percent between 2002 and 20081.

The findings immediately raised questions about how much of the rise is because of heightened awareness of autism or changes in the way it is diagnosed, and how much can be attributed to a true increase in its incidence.

The CDC data were collected in 2008 at 14 sites across the U.S. that are part of the Autism and Developmental Disabilities Monitoring Network. Researchers looked at medical and education records for 337,093 8-year-olds and determined whether they met diagnostic criteria for autism spectrum disorders.

Eric Fombonne, Canada Research Chair in child psychiatry at McGill University in Montreal, has spent the past 20 years analyzing the prevalence of autism. He digs into the CDC data with SFARI.org, explaining that big differences among different states and among children of different ethnicities, driven by the challenge of identifying all children with autism, are likely to be major contributors to the apparent increase.

SFARI.org: Do the numbers in the CDC report represent a real increase in the prevalence of autism?

SFARI.org: What are some of these other factors?

EF: Differences in ascertainment [the ability to identify cases in surveys] and in diagnostic concepts and criteria are still significant issues.

Variability in prevalence among different sites provides evidence of ascertainment difficulties. First, it is important to realize that the current CDC rate of 1.1 percent is only an average that is obtained by pooling together different figures and is not more ‘true’ than each estimate that contributes to it. 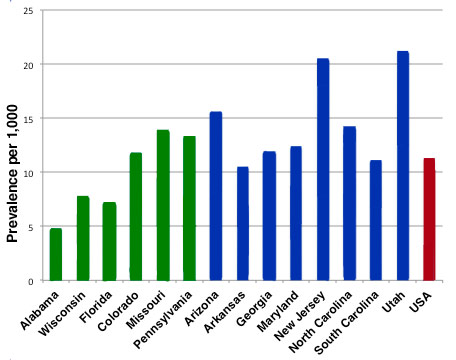 Vast variability: There is a more than four-fold difference between the prevalence of autism in Alabama, which has the lowest rate, and Utah, which has the highest. The U.S. average rate is highlighted in red. States that used only health records (green) tend to have lower rates than those that used both health and educational records (blue).

SFARI.org: Were you surprised by the numbers in the new report?

EF: No. I predicted three years ago that we would see such an increase2. Some states are improving their identification of children with autism due to better services, heightened public awareness and the development of local expertise. This will continue in the future, especially in states or population subgroups where identification of children with autism is currently lagging behind. I therefore predict that we will see additional increases in national U.S. estimates.

SFARI.org: Why is there so much variability?

EF: [Researchers] try their best to apply uniform methods to identify children with autism in all areas, but they cannot do it as efficiently across states. The prevalence is probably severely underestimated in certain areas. Alabama, Florida and Wisconsin, for example, have rates that are much too low compared with the averages in the U.S. or other parts of the world, which are more or less at one percent. 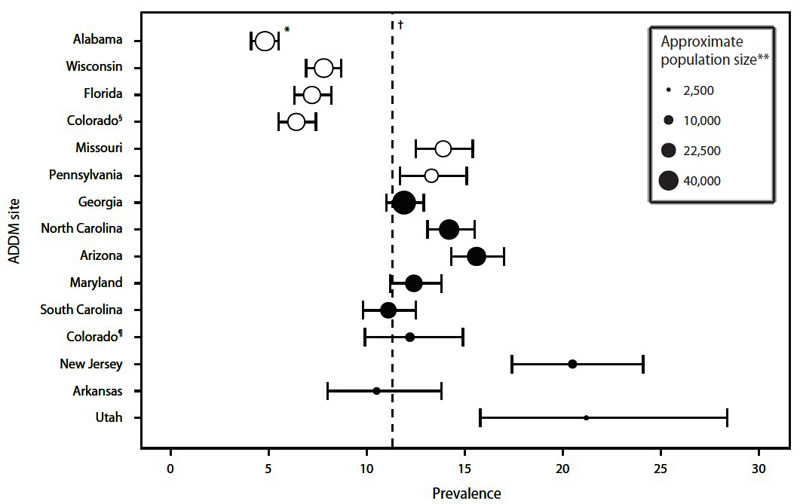 Margin of error: The states with the highest prevalence, Utah and New Jersey, also have the widest error bars because of their small sample sizes. States that used only medical records to assess prevalence (open circles) tend to have lower rates than those that used both medical and education records (filled circles).

Some states use only medical records, others use both medical and educational records. If next time all states include educational sources, the rates will go up, not because of an increased incidence but because the method will be more efficient at identifying cases. (See figure, left.)

SFARI.org: The changes in prevalence seem to vary among different ethnic backgrounds. From 2006 to 2008, rates among non-Hispanic whites have increased 16 percent, compared with 42 percent among blacks and 29 percent among Hispanics. Is that significant?

EF: Yes.Traditionally, there has been systematic under-ascertainment of these groups, especially Hispanics, in the U.S.

If you look backward to 2006, rates were much lower in children from these ethnic backgrounds, and they were therefore expected to rise relatively more than in more mainstream groups. Indeed, the rates have now disproportionately increased in these ethnic minorities. That is good; it means more children from ethnic minorities are being identified, and hopefully accessing support services. Note, however, that the overall prevalence among Hispanic and black children is still much lower than that among white children by factors ranging from 17 to 33 percent. As a consequence, in future CDC surveys, the rates will ‘catch up’ in these groups, leading to further increases in mean rates in the U.S.

SFARI.org: Do the states with the highest rates reflect the true prevalence of autism?

EF: That is more difficult to evaluate.However, I noted some methodological  peculiarities in the survey methods employed in the two states with the highest rates.

If you look at the figure (above, left), Utah has the highest rate but also the biggest error bar. That is because it had an extremely low sample size, a surveyed population of about 2,100 children, compared with more than 36,000 in Alabama and even over 50,000 in Georgia. Also, New Jersey surveyed a population of 7,000, under the 10,000 initial CDC requirement to be included in the study. Utah and New Jersey were added to the study at a later stage and relied on different sampling strategies (using school districts as compared to entire counties). The consequence is that the denominators used to calculate prevalence in these states had to be estimated with different methods, leaving open the question of their validity.

It is also possible that, because New Jersey historically has been good about financing special education and other services, it attracted more families that have children with autism. Or those families are more likely to stay there.

When I reviewed the data, I also found that children with autism from the Utah sample are unusual in several ways. They have the lowest rate of mental retardation, 13 percent compared with the U.S. average of 38 percent. They also have the lowest male-to-female ratio, 2.7 to 1, compared with the typical average of 4.6 to 1. Taken together, these characteristics are really puzzling, because typically you expect a greater sex ratio at the higher-functioning end of the spectrum.The opposite pattern reported in Utah points to a very atypical sample.

SFARI.org: Do all these factors explain the increase?

EF: We do not know. We cannot demonstrate that all this adds up to the entire increase. Equally, we also cannot infer that the incidence is increasing, which the CDC researchers rightly point out in their abstract.

Irrespective of whether the incidence is increasing, the rate is important to know because it has implications for services.

SFARI.org: How can we better determine whether there is a true increase?

EF: Given its means and funding power, the CDC is the best machine to do this presently in the U.S. Theirmethods are quite consistent across surveys and over time. It is worth noting, however, that the CDC surveys do not typically screen for autism in children in mainstream schools or home-schooled children. Children are also not directly evaluated for diagnostic confirmation. The CDC has provided convincing data on small subsamples that its indirect approach to diagnosis is valid, but we do not know if this holds true across sites or over time.

One option is to follow large birth cohorts prospectively, as is being done in Norway. If you follow them over time, you can capture most kids with autism at a later age. But the costs would be prohibitive.

I have other ideas, but I’m not sure I would put my money or energy into it. The whole point of demonstrating changes in incidence is to identify causes of autism, such as environmental events, that could potentially be controlled to prevent disease occurrence. But so far, the exposures we know of, such as prenatal exposure to various medications and possibly some neurotoxins or infectious agents, have only weak associations (if any) with autism and can at most explain only a tiny fraction of the increase. We need more persuasive evidence.