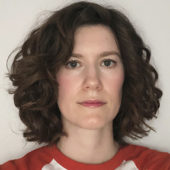 Katie Carey
Illustrator
Sign up for Spectrum’s newsletters
Thanks for subscribing!

"Spotlight on mouse models of autism"

"Why studying autism in mice may be doomed to fail"

"Statistical errors may taint as many as half of mouse studies"

"How to improve mouse models’ usefulness for understanding autism"

In early 2018, Spectrum asked Katie Carey to illustrate a special report on mouse models of autism. For a topic that could have been weedy and dry, Carey chose a colorful palette and created a series of illustrations that were sharp and whimsical, yet captured the scientific points beautifully.

For example, for a story highlighting older mouse models that may still deliver insights, Carey visualized two options: a retirement party with an ambivalent guest of honor, and a retail sale scene. In keeping with the article, her final illustration depicted a mouse on sale — at a great value.

By mid-March, Carey had created 11 illustrations for the special report, with ideas to spare.

In November, she created an animation for a piece on research robots, with a cartoon robot showing changing facial expressions. She has also animated a protein ‘factory’ at a neuronal junction and illustrated sex bias in autism research.

Carey says she welcomes science articles as an opportunity to flex her imagination. From her light-filled home studio in Toronto, Canada, she spoke to Spectrum about how she became a full-time illustrator, what happens after she gets an assignment and how she pushes past creative blocks.

Spectrum: How did you discover that you are an artist?

Katie Carey: I went to school for illustration, but that was my second degree. My first degree was a B.A. in sexual diversity studies. When I graduated in 2008, the recession hit. It was a real moment of “Oh boy, what to do now?” Just by happenstance, I wanted to make a gift for a friend, a little comic. It was definitely a terrible drawing, but it turned into an epiphany. I was doing something that felt important. I thought, “Is there a way I can do this all the time?”

As I was an aimless post-graduate part-time retail worker, it didn’t feel risky to pursue art. I made a portfolio quickly and ended up getting into Sheridan College in Ontario, Canada, for illustration. I started freelancing as soon as I graduated in 2014.

Between the lines: A time-lapse video shows Katie Carey’s robot animation in progress.

It took me years to build up a body of work, but I believe that drive and work ethic are often more important than what people think of as talent.

S: What are some of the challenges of working on science articles?

KC: For the special report on mouse models, a simple challenge was, “How do I keep illustrating mice over and over and over again and still have it be visually interesting?” For an article about variability in mouse strains, I saw that opening screenshot of “The Brady Bunch” with the faces, and thought it would be fun to do with mice. It adds color and character, and it brings them to life.

But I didn’t want to go too far in the direction of fun, because we are still talking about research on animals.

S: What’s the first thing you do when you get an assignment?

KC: First I read the article, then I go and do something else for a little while; I want to let things ferment. Then I come back to the article, open up my sketchbook and start doing little crappy drawings. I just do tons of them, and I try not to censor myself too much. I try to be really open and get it all out on the page.

From there, I start thinking, “What would actually work in the specs that I’ve been given? What speaks clearly to what I’m trying to communicate? What reads well to the audience?” From there, I do three rough black-and-white sketches. Then it’s off to you, the art director. We talk about what works and what revisions are needed before finalizing. The roughs and final are completely digital. The only time I am actually working with pen on paper is that initial sketchbook stage.

S: You seem to work effortlessly in motion and with still images. How do you do that?

KC: More and more often, editorial work is being produced for screens. Knowing from the outset that something is going to be moving means I can build the motion into it from the beginning and keep the illustration itself fairly simple. I’m also very lucky that my partner is a motion designer, so I have someone to help me if get stuck.

S: What technologies do you use in your work?

KC: I have the cheapest, crappiest sketchbook available. And pens. But those are the only traditional supplies I use. I use an external device called a Wacom tablet that comes with a tool similar to a pen. The pen allows me to draw on the tablet, and those marks then appear on my computer screen.

I use Photoshop to build my images, whether I’m sketching or ‘painting’ a full-color final. The digital brushes mimic analog media such as paintbrushes, pencils and markers on-screen so that my work appears more traditional or ‘handmade.’

S: What can you tell us about your process with color?

KC: I’ve always been drawn to using bright colors. When I see work with a more muted palette, I think, “That’s so great; maybe I should try that sometime.” And I’ll start with something more muted, but inevitably it ends up bright. I cannot get away from it.

S: Do you ever get stuck? And what do you do if you are?

KC: If I’m really frustrated, my brain just empties out. Then I need to walk away. I need to go for a walk, go to a café. If I am still struggling, I try looking at what I’ve already done, making new connections, trying to really open my brain up and let it go to some weird places if I need to. I also like to do my own research, digging into the topic more, to see if there is an angle I haven’t thought of yet.

I am in my fourth year of working as a full-time illustrator, so I am past that pressure zone of just starting out. I’m learning how to work most effectively, how to get to my solutions faster and how to get better work out of myself.

Katie Carey is an illustrator based in Toronto, Canada.