Of mice and human interneurons: A Q&A with Moritz Helmstaedter 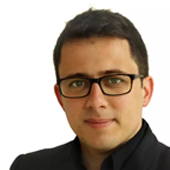 Moritz Helmstaedter
Director, Department of Connectomics, Max Planck Institute for Brain Research
Sign up for Spectrum’s newsletters
Thanks for subscribing!
The Expert:

That may be obvious — and was even the subject of a recent New Yorker spoof. But Moritz Helmstaedter says the fact bears serious consideration because, despite a multitude of clear behavioral differences between mice and people, the neural underpinnings of those differences remain murky.

“That has stunned me ever since med school,” says Helmstaedter, director of the connectomics department at the Max Planck Institute for Brain Research in Frankfurt, Germany. “We had no good idea about what’s really different” between the two species’ brains, he says. “At the level of the circuitry, [they] were stunningly similar.”

To get a better handle on the situation, he and his colleagues mapped the human and mouse connectomes — the complete set of connections between all neurons — in pieces of brain tissue about the size of a fine grain of sand.

People, that comparison revealed, have nearly three times as many inhibitory interneurons as mice do. In fact, the cells make up about 30 percent of the neurons in the human brain, compared with only 12 percent in a mouse’s. The team reported the findings in Science in June.

Spectrum spoke to Helmstaedter about his new work and what the results mean for autism researchers who study inhibition in mice.

Spectrum: What did you think when you saw your first results?

Moritz Helmstaedter: The first thing was to say, “Wow! If there’s three times the amount of inhibition … holy … !” That may mean that the whole inhibition-excitation balance that is such an important topic, especially in pathology-related research fields, is dramatically shifted.

But once we started looking at the complete mapping of all synapses, we could see that other things change at the same time — in particular, the way that axons of excitatory cells innervate other cells.

S: What does that tell you? 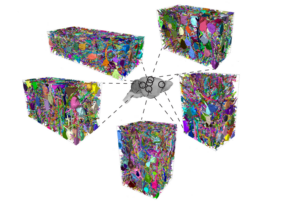 Cell network: Mapping the connections between each neuron in a minuscule piece of brain tissue highlights differences between the brains of mice (pictured) and people.

S: Where is the extra inhibition going?

MH: That’s where things became even more interesting. Inhibitory interneurons come in a myriad of so-called classes, so we asked whether the human brain has three times as many of all of the ‘flavors’ of interneurons.

But that’s dramatically not the case. In mice, about 20 percent of interneurons are this unusual bipolar type, and about 80 percent are parvalbumin multipolar cells, which are very well known. But in humans, the bipolar-type interneurons become half of the interneurons in the brain; they increase by almost threefold in proportion. And when we looked at their innervation — who they inhibit — we found that they are really more selective to innervate other interneurons.

So, this is really the key discovery. There are a lot of things that are not changing between mice and humans. But one thing that is happening is that interneuron-to-interneuron networks — the number of synapses between interneurons — expand by a factor of 10. And this was very unexpected to us and to many people.

S: What could this species difference mean for research on the dysfunction of inhibition in mouse models of autism?

MH: It’s clear that we need to very carefully investigate this novel network in humans. And it’s not clear whether we can investigate it to the necessary degree in mice.

Now, what is not clear yet, of course, is whether this inhibitory-to-inhibitory network contributes to pathology. And we need to determine how much the constituents of the network differ between species to the point that we really cannot even look at it in mice — or whether maybe we can find traces of it in mice to the point that we can study it there.

So as you can see, I’m not saying the mouse doesn’t matter. But it’s definitely true that this raises the possibility that we may have identified one network component in humans that is worth serious research investment in terms of what it is and how it can go wrong.

S: You also looked at the connectome in macaque monkeys. Were they more similar to people in this interneuron-to-interneuron network?

MH: The major part of this expansion of interneurons is already present between mouse and macaque. But not all of it. We didn’t put this in the study, but the data does indicate that there is an additional expansion in this network from macaque to humans. 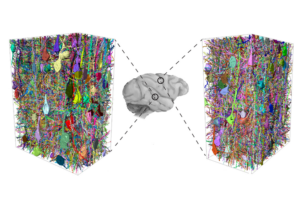 Monkey in the middle: For monkey brains (pictured), the number of connections between interneurons falls somewhere between what is seen in mice and people, early research suggests.

In that sense, macaques would be, in concrete network numbers, much closer to humans than mice are. Obviously, we know that evolutionarily: We departed from our macaque ancestors about 20 million years ago, compared with 100 million for mouse ancestors. But here we have a network feature that we can quantify and say, “This is the degree to which macaques are already much more similar to us than mice are.” And obviously that could mean that we could study these networks in macaques.

But first I think we have to carefully find out what these networks do and how they can be altered and whether they are related to disease.

S: How should researchers go about that?

MH: Well, another thing that we have established with this publication is how to efficiently obtain tissue from the neurosurgical operation room and analyze it using our methods. And this is something that I want to roll out quite massively now. Because I think if we had not only a handful but hundreds of human samples to analyze, then we would be able to start to ask very interesting questions about how network structure — the types of cells present and how they connect to each other, or connectomics — relates to pathology.

I really want to push the concept of connectomics screening, where, very much like genomic screening, we would start to get enough data from enough individuals — really talking dozens, hundreds, not just a handful — so that we would be able to start to distinguish correlations between a person’s connectome and their traits, such as their age, and then possibly also their pathologies.

With the level of analysis that we did in our study, we were able to discover this interneuron-to-interneuron network of the human brain. And that suggests we could also find out whether, at this level of the network, relevant changes occur.