Forging a path for vasopressin drugs for autism: Q&A with Suma Jacob 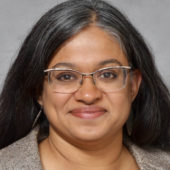 Suma Jacob
Professor, University of Minnesota
Sign up for Spectrum's newsletters
Thanks for subscribing!
The Expert:

For the past decade, the social hormone vasopressin has been a target for medications that aim to improve social communication issues in autistic people. One such medication is balovaptan, which blocks a vasopressin receptor in the brain and body. After promising early studies in animal models, adults and children, though, balovaptan hit a wall.

The vasopressin antagonist showed no advantage over placebo in improving communication and social skills, as measured by a clinical questionnaire, in a phase 3 trial involving 322 autistic adults. Researchers terminated the trial ahead of schedule in 2021, when an interim analysis indicated it was highly unlikely to meet its goals.

Several factors may be responsible for the failure, including differences in participant characteristics and recruitment, and issues with how the outcomes were measured. The team behind the trial outlined the lessons they learned about balovaptan and trial design in autism research in Molecular Autism in June.

Spectrum spoke with co-investigator Suma Jacob, professor of psychiatry and behavioral sciences at the University of Minnesota in Minneapolis, about these lessons and what she says is the way forward.

Spectrum: What do you and your team think went wrong with this trial?

Suma Jacob: I wouldn’t say it is what went wrong. There were some animal data suggesting balovaptan would work, and the first study, VANILLA, had some data suggesting it could work. And then, as we did those studies, the sample size got bigger, and the heterogeneity of participants involved got broader. Looking back, I think doing narrower participant groups and targeting narrower outcomes would be interesting.

S: Are the questions around balovaptan mostly about trial design?

SJ: The biggest question for me about not only balovaptan, but also about the vasopressin and oxytocin systems, is what kind of outcome measure would fit with targeting these systems? Is it, more broadly, social behaviors that go across diagnoses? Is it a subset of social behaviors? Is it specific to autism? Is it a subset of individuals with autism? These are all the questions you have to ask when you influence any neurohormonal system.

S: In the halted trial, the placebo group showed substantial improvement. What factors may have led to this placebo effect?

S: How could these differences be influencing the placebo effect?

SJ: Psychiatric or neurobehavioral trials tend to have a high placebo effect, because they involve looking for behavior and changing it. When sites have less experience doing trials and implementing placebo management training, I’m not surprised that affects it.

From the participants’ point of view, if someone heard about a study and has come from across the state to participate, and they haven’t done a lot of studies, they’re investing a lot of hope in something working because it’s the first time they’re trying something like this. So I could see how that could also contribute to the placebo effect.

S: Are there lessons from balovaptan that could apply to other clinical trials for drugs for autism?

S: Yes. I also think that there are lessons from balovaptan that could apply to all clinical trials period.

Outcome measures are also limited and need a lot of work. We’ve chosen rating scale outcome measures because they scale up, so if we have an old-fashioned pencil and paper short rating scale, you could give it to a clinician at any clinic anywhere, and they can administer it. This is useful after a medication is shown to be effective, to monitor changes and whether it’s working, but the kinds of rating scales we’ve used in autism have not worked really well.

There’s also a lot of variability when different people use a tool. One of the big things we’ve learned from this is to use central raters, which can be done online. When you scale a study to this size, even if you do rigorous training with each site, and the people administering tests try to follow all these standard practices, there’s still variability among those administrators.

S: What are the next steps for balovaptan?

SJ: Some of my colleagues are looking at genetics and some other things more carefully.

To me, figuring out and establishing measures for how we study adults with autism was a unique contribution of the work. Other trials with new medications are looking at things like [electroencephalography] biomarkers or other kinds of biomarkers that don’t need rating scales. These will decrease placebo response because it’s something that a participant is not aware of. A range of digital and other biomarkers are being explored in new studies with new drugs that are being investigated.

I don’t know if balovaptan itself is what we’re going to pursue. There’s still enough really interesting data on the oxytocin and vasopressin systems and drugs that work well to modulate those systems. I don’t think balovaptan is the end of that path. I think it’s a great example of a medication that could have potential, but we need to do a better job of doing clinical trials with new molecules or new agents that come out.