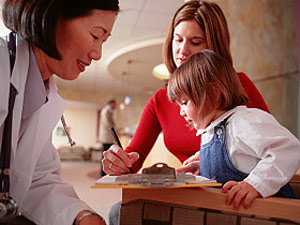 The number of genetic studies of autism, indeed of most genetic disorders, is booming. Given the relative novelty of the field and the uncertainty often inherent in genetic findings, it’s important for researchers to understand what people expect from participating in these studies and how they react to the findings.

That’s especially important for developmental disorders such as autism, because parents must weigh the risks and benefits for their child.

In a study published 11 July in the Journal of Autism and Developmental Disorders, researchers from the Hospital for Sick Children in Toronto interviewed nine parents who have a child with autism enrolled in a research study to find out why they became involved and what they expect to gain. They say the findings may help researchers communicate and support families through the research process.

The researchers say that sense of uncertainty might in part motivate parents to enroll in genetic studies. “The act of participating in research itself might reduce feelings of helplessness and increase feelings of personal control over an uncertain situation,” they write.

A number of participants reported the benefit of being able to network with other families and compare notes on their experiences. Indeed, some genome studies are making this type of networking an integral component of the project, the researchers note.

As scientists well know, participating in genetic research often doesn’t translate to better treatment for the child, even if a genetic factor is found. That’s one of the most important things to make clear to candidate participants, the researchers say.

But parents who responded to the survey outlined a number of other benefits to joining a genetic study.

For example, they appreciate the access to experts who acknowledge and validate their concerns. “The psychological benefits derived from this recognition are significant and not to be underestimated,” the researchers say.

Given that children with autism often don’t look different from their typically developing peers, parents often feel they are blamed for poor parenting when a child acts out. Finding a genetic cause for their child’s disorder would provide proof that the child has a medical condition, and more broadly raise awareness of the realities of autism.

For researchers, too, there’s a positive message: Though the survey was small, with just nine families, it suggests that these families find value in participating in genetic research.