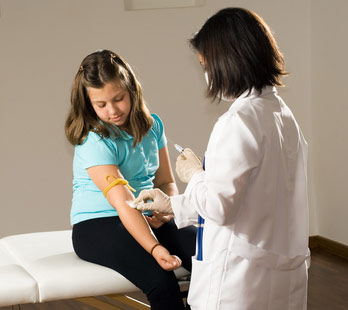 Parents searching for a genetic diagnosis for their child with autism now have a new option: a test that analyzes 62 different genes linked to syndromic autism, meaning cases of the disorder caused by mutation of a single gene.

The test, launched last month at the Annual Clinical Genetics Meeting and developed by RainDance Technologies, is the first to sequence so many autism-linked genes simultaneously. It is offered through the Greenwood Genetic Center, a nonprofit organization in South Carolina.

Only about 5 to 15 percent of cases of autism spectrum disorders have a detectable genetic cause, however.

Perhaps because of this, families who seek out genetic testing for children with autism are in the minority. A study published in March in the Journal of Genetic Counseling found that about 20 percent of families surveyed had seen a genetics professional and about 30 percent had undergone genetic testing.

For children who do undergo testing, physicians typically first run a chromosome microarray test, which detects small structural variations in the genome that have been linked to autism, as well as tests for fragile X syndrome, an inherited form of intellectual disability. Most individuals with fragile X display features of autism and about one-third of them meet the diagnostic criteria for the disorder. If the child has specific clinical symptoms, physicians might do targeted genetic testing for other single-gene disorders.

The new test, which costs $5,500, could be used on children who have normal microarray results to look for a range of single-gene disorders much more efficiently. Included in the testing panel are the autism-linked genes NRXN1, SHANK3 and UBE3A.

If the test detects a specific mutation that has been previously identified as the cause of an autism-related syndrome, it’s likely that it is also the source of the individual’s disorder. If it finds mutations of unknown significance, Greenwood recommends additional testing of family members. (If a healthy family member shares the mutation, it’s unlikely to be the source, or at least the sole source, of the disorder.)

At this point, given the newness of the test, it’s not yet clear what percentage of children with autism it will be able to diagnose. And a diagnosis of syndromic autism may or may not influence treatment.

The test arrives at an economic crossroads in clinical genomics. Given rapidly dropping costs in sequencing technology, the costs of exome sequencing — reading the DNA of the entire protein-coding region of the genome — are quickly falling in line with clinical diagnostics that test only a few genes.

“If parents REALLY want a genetic diagnosis, clinical whole-exome sequencing is now available and covered by insurance,” says Wendy Chung, assistant professor of pediatrics at Columbia University, who is also the principal investigator of the Simons Variation in Individuals Project, funded by the Simons Foundation, SFARI.org’s parent organization. Exome sequencing doesn’t guarantee that physicians will find the genetic source of a child’s disorder, but the chances are much higher, she says.