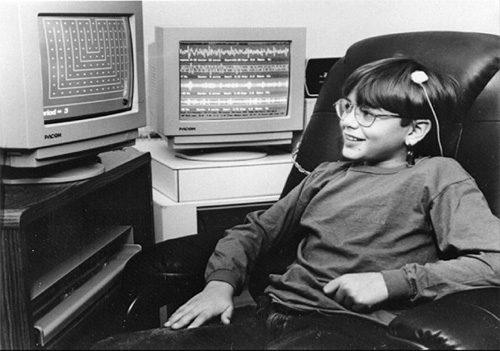 Mind games: During neurotherapy, children can get visual feedback from a computer about their brain activity.

Can your brain be trained to make better brain waves?

That’s the bizarre premise of ‘neurofeedback,’ a technique in which participants don a cap of electrodes and are rewarded — with soothing music, say, or points in a video game — for ‘desirable’ brain activity.

Although the Pavlovian approach (also called ‘neurotherapy’) has been around since the 1960s, there seems to be a renewed interest in using it to treat everything from headaches and hypertension to attention deficit hyperactivity disorder (ADHD) and autism.

For example, last week, researchers at a meeting of the American Academy of Child and Adolescent Psychiatry in New York reported that children with ADHD show improvement in their behaviors after receiving neurotherapy.

A handful of reports have found similar benefits for children with autism, though because the studies focused on a variety of brain patterns, it’s hard to know what to make of them.

A 2008 report on eight boys with autism found that training them to normalize the mu rhythm — a brain wave of 8 to 12 Hertz that has been linked to the disorder — improves their scores on attention and impulsivity tests.

In March, a long-term study of 150 people with Asperger syndrome found that training them — by granting virtual points (which can be traded for prizes) when they produce the desired wave — to suppress brain waves of 3 to 7 Hertz and increase those of 12 to 15 Hertz, improves attention and social behaviors and raises intelligence quotients. The same month, yet another study suggested that the best neurofeedback approach for autism is to focus on long-range brain connections, which are reportedly weak in individuals with the disorder.

Although these studies are all over the place, the method’s supporters say it is a great alternative to pharmaceutical drugs, which have limited efficacy in autism and can come with harsh side effects. Others see neurotherapy as high-tech quackery.

After all, what exactly counts as a normal or abnormal brain wave? Although many studies have shown brain-wave signatures of autism, there is also a huge amount of overlap with patterns seen in healthy people.

Much more research is needed before anyone can fully judge the technique, which typically requires 40 to 50 sessions and costs $3,000 or more. I’m inclined to believe that the meager positive data reported so far are simply the result of tried-and-true behavioral therapy — participants learning to relax, or to focus their attention by practicing it over and over — wearing the unnecessary and expensive cloak of neuroscience.