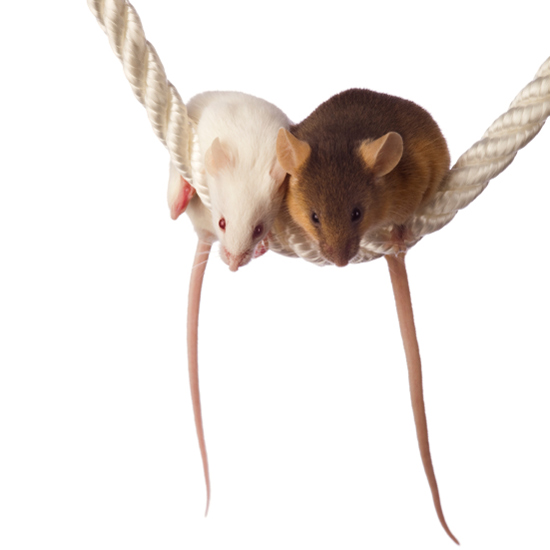 Life lessons:&nbsp;Mice with a genetic predisposition to be antisocial benefit from play with more social peers.

Nature or nurture? Genes or experience? This is the question often debated when people discuss social skills.

A new study on antisocial mice suggests that both influences are important.

An inbred strain of mice, called BTBR, have social behavior deficits reminiscent of autism: the mice interact less with others, show repetitive self-grooming and have fewer vocalizations in response to other mice, which researchers have suggested could be similar to language defects in autism. This is ‘nature’ at work — a specific genetic predisposition leads to antisocial behavior.

But ‘nurture’ can influence this behavior, say researchers at the National Institutes of Health.

In a poster presented last year at the Society for Neuroscience annual meeting, the researchers showed that interacting with more social playmates — an inbred highly social mouse strain — can make the BTBR mice more social.

A new paper, published online in October in Autism Research, expands on these results. The researchers let BTBR mice play with the highly social mice for either 40 or 20 days after weaning. In either case, the BTBR mice became almost as sociable as their playmates, choosing the company of a novel mouse over an object. They did not show a change in repetitive grooming, however.

The fact that 20 days of interaction is as effective as 40 days suggests that there is a critical period for this type of therapy. The researchers are trying to find this window.

I find this fascinating because, for one, it shows that researchers can use mice for controlled studies of behavioral therapy — and mice aren’t susceptible to the placebo effect. Mouse studies would never substitute for those in people, of course, but they could provide a valuable and rigorous supplement.

The study also shows that genetics is not the last word on autism. Mutation or not, therapy, treatment and the right play dates can still change how you behave.