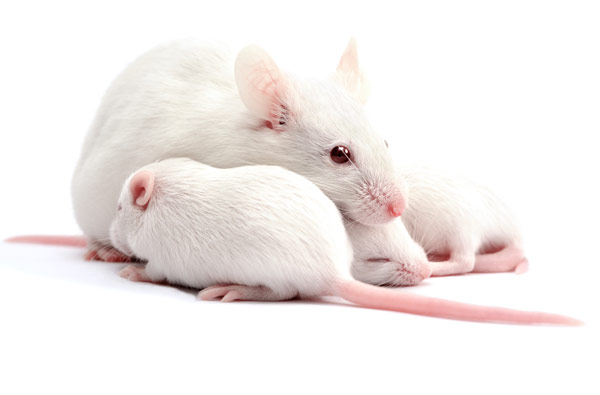 A string of epidemiological studies have linked maternal infection to an increased risk of autism. In September, a Swedish analysis of more than 2 million people found that an infection during pregnancy increases the risk of having a child with autism by 37 percent. But the biological mechanisms underlying this link are unclear.

A new mouse study, published 11 November in Stem Cell Reports, suggests that molecules released during inflammation in the womb can trigger brain overgrowth and behavioral impairments reminiscent of those seen in autism. What’s more, blocking these molecules normalizes both brain size and behavior.

Researchers mimicked maternal infection by injecting pregnant mice with lipopolysaccharide, a molecule that triggers inflammation in the womb. They then studied the pups at birth and after 20 or 60 days using a panel of behavioral tests, and examined their postmortem brains under a microscope.

The pups show decreased interest in other mice, fewer vocalizations, and anxiety and excessive grooming. These traits are consistent with the social impairments and repetitive behaviors seen in people with autism. The mice also tend to have enlarged brains — another feature of the disorder.

A closer look at the mice’s brains revealed greater numbers of microglia — cells that play a key role in the inflammatory response — as well as of neural stem cells, compared with controls. This led the researchers to look at reactive oxygen species, which are molecules released by microglia and promote stem cell proliferation. They found that levels of these molecules are also elevated in the mouse brains.

Blocking reactive oxygen species with prenatal injections of apocynin, a compound that inhibits their production, prevents the brain overgrowth and repetitive behaviors. However, some apocynin-treated mice have abnormally small brains, emphasizing the delicate balance of this system.

Interestingly, the brain overgrowth triggered by inflammation is exaggerated in mice with mutations in PTEN, a gene best known for its role as a tumor suppressor. Roughly 4 percent of people with autism have PTEN mutations, and these individuals tend to have enlarged brains.

The link between maternal infection and autism is undoubtedly complex. This study points to a possible link between inflammation in the womb, brain overgrowth and the behavioral impairments seen in autism.

The researchers argue that individual susceptibilities — both genetic and environmental — may be driving the different responses to maternal infection. What those susceptibilities are remains to be seen.