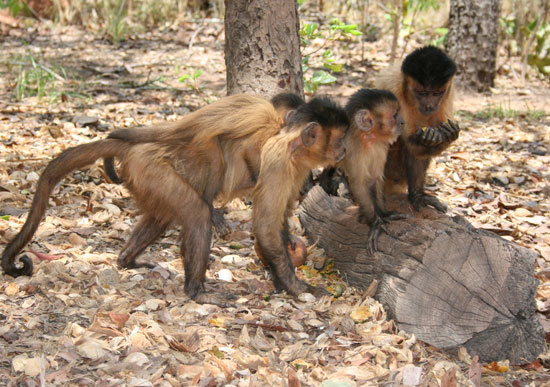 One of the few social gestures that can capture the attention of children with autism is when a playmate imitates their actions.

In fact, when their parents play copycat — by immediately mimicking the kids’ gestures or playing with an identical toy, for example — some children with autism suddenly take notice, making eye contact, smiling and speaking more.

A new study on monkeys shows that the animals not only pay attention to imitative play, but prefer to interact with people who show it — suggesting that this impulse is deeply ingrained in innate primate social behavior.

In the study, published today in Science, researchers carried out a series of experiments with capuchin monkeys, a highly social species.

Each animal played with a small plastic ball while watching two human experimenters playing with identical balls. The study found that monkeys look longer at, move closer to, and are more likely to exchange tokens with the experimenter who mimics the animal’s own behavior than one who does not perform these deliberate imitations.

The findings may not have been all that surprising to the researchers, because healthy people enjoy being copied, too. Adults unconsciously tip more to waitresses who verbally mimic them, for example, and during important interviews, interviewees will often copy the exact body language of their questioners in order to create rapport.

People with autism — despite their attraction to the mimicking play of others — are themselves poor copycats, which undoubtedly contributes to their strained social interactions.

Although we still don’t know the brain mechanisms behind abnormal imitation behaviors, the new study bolsters the idea that imitation-based therapies could help kids with autism build stronger social bonds by engaging their initial interest in these behaviors and encouraging them to perform mimicry themselves.