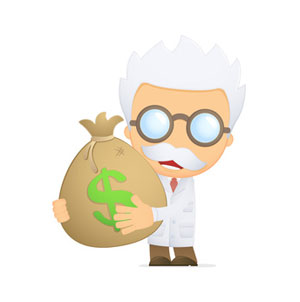 To scientists struggling to find funds, a sobering new report is sure to raise ire: Tens of millions of dollars in research funds may be going toward duplicate projects, colloquially known as ‘double-dipping,’ according to an analysis published 30 January in Nature.

Researchers from Virginia Polytechnic Institute and State University (Virginia Tech) in Blacksburg, Virginia, identified 39 pairs of grants awarded between 2007 and 2011  — encompassing more than $20 million  — that used the same or similar text to describe their goals.

Funding agencies may have already identified some of these cases and adjusted grant amounts accordingly. But the researchers predict that there are many more cases that go unnoticed.

They analyzed data from more than 600,000 grant summaries, totaling about $200 billion in funds, downloaded from public websites of the biggest funders of biomedical research in the U.S.: the National Institutes of Health, the National Science Foundation, the Department of Defense, the Department of Energy and the Susan G. Komen Foundation, which funds breast cancer research.

The researchers used software designed to detect similarity in text, an approach similar to that used to detect plagiarism. They then manually looked at summaries of the 1,300 most similar pairs, examining specific aims, objectives and goals.

Similar wording in these sections of a grant suggests that the authors reused existing material. (The researchers excluded grants that pertained to large interagency efforts or shared equipment.)

They found 167 grant pairs that they ranked as having significant overlap, which totaled around $200 million. An estimated $69 million of that may represent duplicate funding for the same project.

The researchers caution that they can’t be sure these grant pairs represent cases of deliberate double dipping. That would require access to the full grant materials, which they did not have.

For example, it’s common for scientists to apply to different agencies for different aspects of the same project, especially when an individual grant can’t support the entire project.

Other cases are fuzzy. For example, sometimes a scientist wins a grant that includes funding for certain lab members, and then applies for a second grant to support graduate students. “There seem to be no clear standards on whether this is an acceptable practice,” the researchers write.

Still, at least some of the cases represent dishonesty, with scientists sending similar grants to two agencies, or with different collaborators listed as the principal investigators.

In a well-publicized case last year, former Penn State professor Craig Grimes pleaded guilty to accepting grants from two federal agencies to fund the same research. (It is acceptable to apply to different agencies for funding for the same project, but illegal to accept it from more than one agency.)

The researchers also noted that scientists often submit grants for research that is already complete. “The later grant sometimes proposed studies that were cited as preliminary data in the earlier grant, sug­gesting that the hypothesis had already been resolved,” they write.

Overall, the researchers speculate, the analysis underestimates the scope of the problem. They suggest that both public and private funding agencies need to better coordinate their efforts. They propose a central database for all grant proposals.

The software used in the study is freely available. The lead investigator, Harold “Skip” Garner, professor of biological sciences, computer science and medicine at Virginia Tech, has founded a company that sells a commercial version of the software.