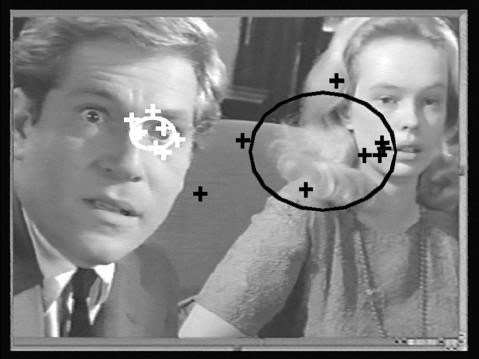 An old, and I believe truthful, saying about science is that it can show the ‘what’ and the ‘how,’ but never the ‘why.’ This is important to remember in autism research, which seeks to understand what goes on in the minds of people with the disorder.

A review article published earlier this year in Progress in Brain Research suggests that scientists may have been too quick to explain away the results of eye-tracking studies.

A 2002 study that used new technology to track the gaze of teenagers as they watched Who’s Afraid of Virginia Woolf? famously reported that individuals with autism spend more time looking at the actors’ mouths than at their eyes. Typical teenagers instead look mostly at the actors’ eyes.

This result aligns nicely with the known social deficits in autism, tempting us to conclude that people with autism are intimidated by eye contact. But this isn’t necessarily the case, says the new review.

The results of eye-tracking studies vary based on the participants’ age. For example, many children and infants with autism look at others’ eyes just as much as their healthy peers do, according to some studies.

According to one study, children who are learning to speak are more likely to look at the mouth than typical adults or children with autism. But even typical adults look at the mouth to help understand what someone is saying. It may be that people with autism look at mouths because they struggle with language, not because they’re avoiding the eyes.

Temple Grandin, best-selling author, professor of animal science at Colorado State University and a well-known advocate with autism, also has a different interpretation of 2002 eye-tracking study, which she commented on at a talk she gave at the Simons Foundation, the SFARI.org parent organization.

“They say it’s social, but it looks a lot like attention shifting to me,” she said, referring to a self-described symptom of her own autism — difficulty switching attention from one thing to another.

It may be that the original interpretation is right, and that people with autism prefer not to make eye contact for social reasons. But several studies, and insight from one high-profile individual who has autism, caution against trying too hard to divine the ‘why’ from the ‘what.’