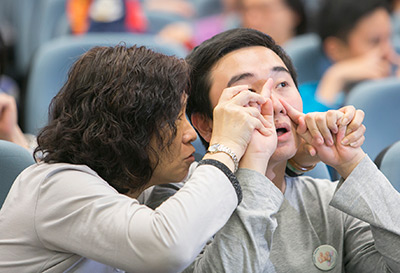 Standing calmly while massaging your nose doesn’t sound like your average autism therapy. But apparently it is one — and a surprisingly effective one at that.

The movement is part of the repertoire of Nei Yang Gong, the Chinese practice of moving slowly with grace and focus.

A new study, published 10 July in PLoS One, shows that children with autism, even those with lower intelligence levels, improve their self-control after practicing Nei Yang Gong for a month. A control group tried progressive muscle relaxation, a technique known to alleviate anxiety and problematic behavior such as aggression, but showed fewer improvements.

Certain exercises, such as doing karate-like punches, blocks and kicks toward imaginary opponents, have been shown to reduce repetitive behaviors and behavioral problems in children with autism, but research exploring other non-traditional therapies is riddled with shaky methodology.

In the new study, Hong Kong researchers followed 20 children with autism who practiced Nei Yang Gong and 20 who tried progressive muscle relaxation. The children, aged 6 to 17 years old, attended the hour-long biweekly classes for four weeks. About half of the children in each group reported practicing their exercises at least six days a week.

The researchers confirmed autism diagnosis with the Autism Diagnostic Interview-Revised, a well-known test for the condition. Six children in each group have intellectual disability, with an intelligence quotient below 70.

During the Nei Yang Gong sessions, a clinical psychologist taught the children to practice movements meant to circulate their qi, or energy, or to relax certain body parts, such as their shoulders, all in accompaniment to music. If the children became distressed or frustrated, the psychologist encouraged them to calm themselves, by resting their hands on their stomachs to observe their breath, for example.

The children in the control group learned how to tense and relax different sets of muscles, and practiced techniques aimed at improving their social skills, emotional awareness and behavioral stability.

At the beginning of the study, all of the children had similar levels of self-control, according to three tests, including the Tower of London task, in which children build a virtual tower without violating a set of rules.

By the end of the month, the children in the Nei Yang Gong classes had four times as much self-control as the controls. They showed less impulsivity in problem-solving, better control of their tempers and faster completion on a test of their ability to control motor skills and inappropriate behaviors. In contrast, the control group showed little or no improvement in these measures.

Parents later reported that children in the Nei Yang Gonggroup also improved in other aspects — for example, being more sociable and more aware of their environment — and in measures of behavior and health, including fewer sleep and digestive problems. Children in the control group also became more sociable.

The researchers also looked at the anterior cingulate cortex, a part of the brain that mediates inhibition. They used electroencephalography, which measures the brain’s electrical activity.

Studies have shown that children with autism have less activity in that region than controls do.

Other autism interventions, such as behavioral therapy, can demand up to 20 hours a week of a child’s time for two years. Children practicing Nei Yang Gong seem to benefit from the therapy in as little as four weeks, suggesting that it could be a valuable, fast-acting therapy for children with autism, the researchers say.