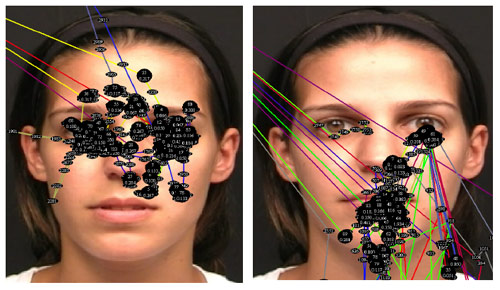 Next time you’re talking to a baby, make sure you enunciate. New research shows that babies read lips as they are learning to speak.

The study captured headlines last week, with many of the news reports focusing on its applications for autism. The findings may inform attempts to identify early markers of autism, but as the authors point out, they aren’t there yet. The current study focused entirely on typically developing children.

By tracking babies’ gaze as they listen to adults talk (see photo, left), researchers found that at around 6 months of age, when babies typically begin babbling in preparation for speech, they shift their focus from speakers’ eyes to their lips.

Looking at the mouth may provide infants with audiovisual cues that help them develop language.

Around 12 months, babies’ gaze tends to shift back to the eyes when listening to their native language, probably because those cues become less important, and the infants realize that the eyes hold valuable clues. (Interestingly, when listening to a non-native language, such as Spanish in the case of this study, the babies continue to look at the speaker’s mouth past 12 months of age.)

Taken together, these findings suggest that identifying an early predictor of autism won’t be as simple as measuring where babies look, since typically developing children also focus on the mouth around 8 months of age.

After all, if typical babies use the mouth for additional clues to language, maybe infants who have language difficulties need to focus on these clues even longer. (Even adults tend to read lips when background noise interferes with their ability to hear.)

“It may be that the gaze pattern is more closely related to the language problems that so often accompany [autism spectrum disorders] than to autism itself,” says Rhea Paul, director of the Yale Child Study Center’s Laboratory of Developmental Communication Disorders.

Sorting this out would require a comparison between infants at risk for autism and those who have a family history of other heritable developmental disorders, such as language delay, attention deficit hyperactivity disorder or dyslexia, and infants at low risk for a disability, she says.

Paul also cautions against relying on any single measure as a marker for autism, given the normal heterogeneity of baby behavior.

About 30 percent of the babies that the researchers attempted to measure in the new study had to be excluded for various reasons, such as fussing. Maybe if those wiggly babies had been included, the results would have been different, she says.