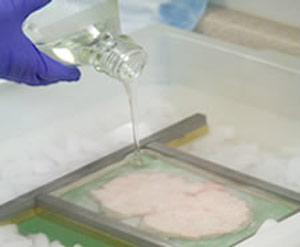 What makes humans so different from our primate cousins? The answer may lie in unique patterns of gene expression soon after birth, primarily in genes required for synapses — the junctions between neurons — to form and function properly.

The findings emerged from an ambitious analysis of postmortem brain tissue collected from humans, chimpanzees and macaques. Researchers measured the expression of 1,200 genes in tissue samples gathered from each species at different ages, from before birth to the end of life.

The results emphasize the power of being able to examine how gene expression patterns evolve over a lifetime, rather than how they differ at a single moment.

Researchers studying autism are now applying the same approach to brain tissue collected from people with autism, which they hope will shed light on how brain development goes awry early on.

In the primate study, published 2 February in Genome Research, researchers grouped together genes based on the role they play in the cell. They discovered that those that are involved in synapse formation also have the most unique gene expression pattern in humans compared with the other species.

These genes tend to turn off soon after birth in chimps and macaques, but stay on in humans until age 5, the study found. Similarly, the number of synapses in non-human primates peaks soon after birth, but in children continues to bloom until about age 4.

“Humans have much more time to form synaptic connections,” lead researcher Philipp Khaitovich, an evolutionary biologist at the Max Planck Institute for Evolutionary Anthropology in Leipzig, Germany, and the Chinese Academy of Sciences (CAS) in Shanghai, China, told ScienceNow.

Eric Courchesne, director of the Autism Center of Excellence at the University of California, San Diego, is doing a similar type of analysis on brain tissue samples from people with autism.

He and others have found evidence that children with autism have an abnormal pattern of brain development, in which some regions grow more quickly and some more slowly than normal during different stages of development.

The specifics of the pattern are controversial, however, and Courchesne says that postmortem studies of brain tissue may help to sort out these discrepancies.

Carrying out such studies is challenging. A number of efforts to catalog gene expression during development are underway in postmortem brains from typically developing people, but the availability of tissue samples from people with autism is limited.

“We will not know for quite a while whether we will have sufficient samples at useful ages to see effects,” says Courchesne.

What’s more, the quality of the samples can influence results.

Still, the potential benefits of this type of study for autism research emphasize just how important it is to grow collections of tissue samples.