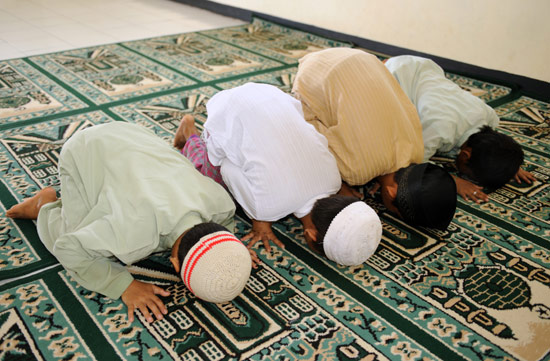 In popular culture — from the TV show Parenthood to high-traffic health blogs — I’ve noticed more and more stories about the domestic difficulties that come from raising a child with autism, particularly the emotional and financial toll it takes on parents.

I had assumed — wrongly — that this would be true in all cultures. I was surprised to read, in an essay published earlier this summer, that some Muslim families embrace their child’s autism. What’s more, it seems that some aspects of Islam help these children develop stronger language skills.

For her doctoral dissertation, educational anthropologist Brinda Jegatheesan observed three South Asian immigrant families who have young boys with autism. All are practicing Muslims and multilingual.

For 17 months, Jegatheesan observed and tape-recorded how family members interact with each another and with other people in their communities. She also conducted in-depth interviews with the parents to find out their opinions of the disorder.

Unlike the other stories I’ve heard, the parents said they viewed autism as a gift. They felt that Allah had chosen them as caregivers for their child because they would be responsible and loving.

Perhaps because of that outlook, the children participated in every aspect of family life, from visiting the large and noisy households of extended family members to participating in daily prayers.

Prayer, according to Jegathessan, is especially helpful. Prayer requires the children to remember and repeat lengthy excerpts from the Qur’an. Because Muslims pray five times a day, it also requires the children to adapt to interruptions of other activities — something with which many children who have autism struggle. Two of the children did not speak at age 2 and 3, but were chatting in several languages — and even competing in prayer recitation competitions — by age 6.

These are provocative, if subjective observations of just three families. The children could have done just as well in an early intervention program in a non-Muslim home. Still, the work calls attention to the lack of controlled studies about how autism is perceived — and how it might best be treated — in other cultures.