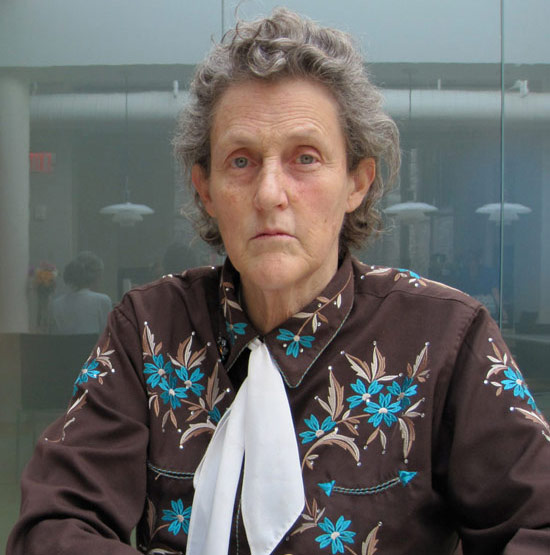 The bright fluorescent lights, clacking and clattering of carts and cash registers, and general sensory overload of big-box stores are a hellish experience for many people with autism.

“Out West we call them Wal-Mart screamers,” says Temple Grandin, best-selling author and advocate for people with the disorder.

Sensory sensitivity is one of the most understudied aspects of autism. That’s a serious problem, because it underlies much of the distress experienced by people with the disorder, says Grandin, professor of animal science at Colorado State University.

She discussed her own struggles with sensory sensitivity in a talk last week at the Simons Foundation, SFARI.org’s parent organization. For example, she said, printed words dance in front of her eyes and rooms with fluorescent fixtures “flicker like a discotheque.”

Extreme sensitivity to light, to sound, to texture and touch prevents many individuals with autism from venturing out into the wider world, she pointed out.

Overwhelmed by too much stimulation, many turn to repetitive behaviors to try to soothe themselves.

Not everyone has the same sensitivities, Grandin pointed out. In a group of ten people with autism, three might be sensitive to bright lights, another two to loud noises and the rest to oddly textured food or scratchy fabrics.

“One size doesn’t fit all,” she said, when it comes to treatment. “You’ve got to assign subjects to treatment based on their sensory symptoms, not their autism diagnosis.”

Grandin has strong opinions about many autism-related subjects, and she shared them with an attentive audience here at the foundation. Wearing a brown cowboy shirt with beautiful turquoise and beige flowers, and speaking forthrightly in a Western drawl, Grandin candidly discussed overly medicated children and under-trained adolescents with the disorder.

She said she is concerned, for example, about the possible long-term effects of some medications, such as risperidone and Abilify, prescribed to young children with autism for sleep problems and irritability. “I’m not against medication,” she said. “I’m just against turning kids into zombies.”

She is also disturbed by an increasing emphasis on verbal skills in schools, and the phasing out of what she calls ‘hands-on’ classes such as sewing and shop that once provided practical skills for individuals with different abilities.

But even smart kids with Asperger syndrome are ill-prepared to meet the challenges of the workplace these days, she noted repeatedly. “I’m seeing a lot of geeky, nerdy kids graduating from college without work skills,” she said.

Grandin’s autism did not prevent her from attending church — in petticoats, no less — every Sunday as a child, working part-time jobs sewing and tending horses as a teenager, and otherwise carrying out the responsibilities expected of young people in the 1950s.

But too many children with autism today, she said, “are in the basement playing video games.”

Young people with autism need mentoring, she said, describing how important her science teacher was in guiding her education. She also stressed the importance of manners, and learning to be on time for appointments or to shake hands — simple lessons she learned at a young age.

But helping kids learn how to manage their sensory sensitivities is the first step.

“Before you can learn to be social, you need to learn how to tolerate your environment,” Grandin said at a cocktail party following her talk. “I know many people who couldn’t stand to be in this room.”