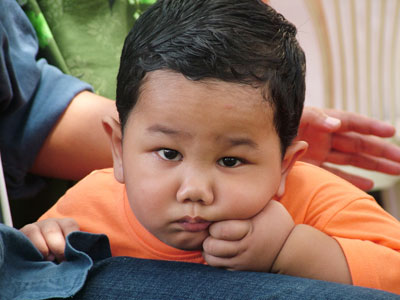 Parents of children with autism often worry about diet — their children can be picky eaters, sensitive to certain foods and perhaps
prone to obesity.

According to a new study, published 13 March in Childhood Obesity, more than 30 percent of children with autism are overweight or obese, a rate that is significantly higher than in the general population.

The findings are based on the medical records of 273 children with autism with a mean age of just under 4 years. (The researchers excluded children who have genetic or physical conditions linked to weight, such as Prader-Willi syndrome or being wheelchair-bound.)

The findings are in line with previous research, which has found that 25 to 30 percent of children with autism are overweight or obese, compared with 12 to 24 percent of controls.

In the new study, researchers classified 42 children, about 15 percent, as being overweight — defined as having between the 85th and 95th percentile of body mass index (BMI) for their age. Another 48 children, almost 18 percent, were obese, with a BMI greater than the 95th percentile.

In comparison, a previous estimate based on a nationwide sample of children of similar age, published in 2010 in the Journal of the American Medical Association, found that about 11 percent are overweight and 10 percent obese.

Children diagnosed with classic autism are more likely to be overweight or obese than those diagnosed with milder forms of autism such as Asperger syndrome or pervasive developmental disorder-not otherwise specified, the study found.

Some antipsychotic drugs have been linked to weight gain in people with schizophrenia, but the researchers did not find that medications influenced weight in this sample. Only five percent of the children were taking medications, making it difficult to draw strong conclusions. However, the high obesity rate in an overwhelmingly unmedicated group suggests that drugs aren’t the main culprit.

It’s not yet clear why children with autism are more likely to be overweight.

It may be due to a restricted diet — some children with autism refuse to eat certain foods — motor problems or inactivity tied to social deficits. (For example, previous research suggests that children with autism spend even more time than their peers do playing video games or watching television, which translates to less time for physical activity.)

In some cases, there may be a biological explanation. A handful of studies have tied specific genetic variations to both obesity and autism; 70 percent of people with deletions on chromosome 16, specifically a region called 16p11.2, are overweight or obese, according a small study published in 2011.

A second study, also from 2011, found that four people with deletions of the autism-linked 11p14.1 region on chromosome 11 are severely overweight.

Regardless of the cause, the researchers say the findings emphasize the need to create childhood obesity programs targeted specifically to children with autism.