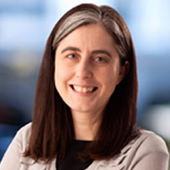 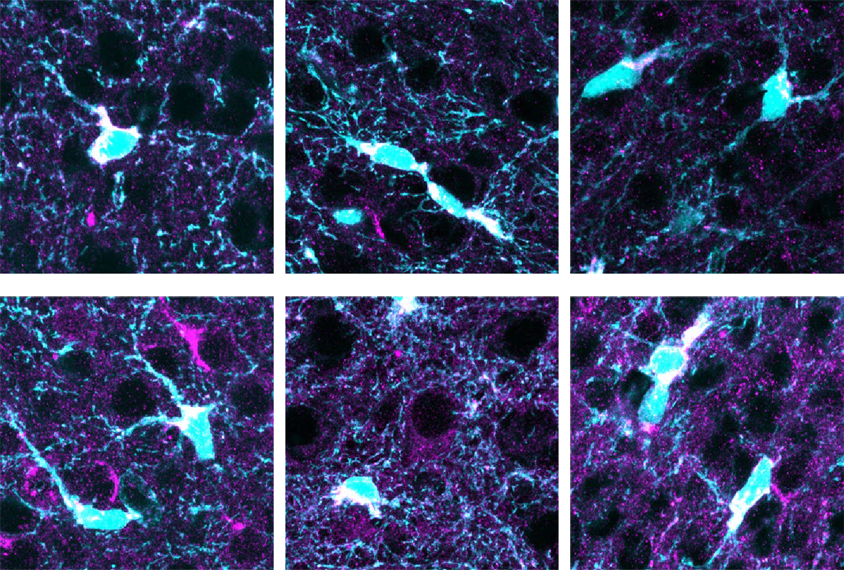 Neurons garner much of the attention in autism research, but they rely on star-shaped brain cells called astrocytes to grow properly and form synapses. Neurons from wildtype mice, for example, fail to thrive when exposed to astrocytes cultured from mice or people with autism-linked conditions, including Rett syndrome, fragile X syndrome and Down syndrome.

The explanation may lie with a protein the syndromic astrocytes secrete, according to a study published in August in Nature Neuroscience and led by Nicola Allen, associate professor of molecular neurobiology at the Salk Institute in La Jolla, California.

An investigational drug that mimics the action of IGF, called trofinetide, already seems to ameliorate problems related to Rett syndrome in girls and women. Spectrum spoke with Allen about her results’ implications for future drug targets for Rett and other neurodevelopmental conditions.

Spectrum: Why did you focus on these three syndromes?

Nicola Allen: We picked them because these were the three main syndromes for which other people had shown the astrocytes had kind of a similar effect. What we wanted to do was see if, across these syndromic forms that have very different genetic causes, there was any convergence on the level of how the astrocytes change. And if so, that would then give us insight in cases in which we don’t know the cause, but we know what the effect is, into ways we could think about trying to target that therapeutically.

S: Your study found little overlap between the astrocytes’ changes in gene expression and protein secretion. What does this tell us?

NA: I think it’s just reminding us that there are many steps between RNA production and the protein being made and modified and sent to the right place where it needs to act. This suggests that the regulation that’s happening isn’t just happening at the stage of the RNA being made, it’s happening further downstream. So when you’re thinking about cell-to-cell communication as we are, you want to analyze that final output step — in this case, the proteins being released from the astrocytes.

S: Among the proteins that were expressed differently, you homed in on IGFBP2. Why?

NA: The reason we picked IGFBP2 is because, of all the really important work that has been done, particularly with Rett, looking at IGF1 and IGF2 has shown that these pro-growth factors can have beneficial effects in rescuing some deficits. One of IGFBP2’s known roles is to act as an inhibitor of IGF. We were very interested in the idea that, in Rett and the other disorders, astrocytes could be releasing too much of this inhibitor, and this inhibitor then stops this IGF from working.

We showed that if we took proteins from the wildtype astrocytes and just added extra of this one protein, IGFBP2, then this media inhibited neuronal growth, telling us that this protein by itself had a pretty potent affect.

And then in the opposite way, we used an antibody that binds the IGFBP2 at the place where it would normally interact with IGF, stopping the binding protein from inhibiting the IGF. So we could show in the cell-culture experiment that this could then overcome some of the inhibitory effect in the Rett syndrome astrocytes.

S: Did this outcome look the same across all three conditions?

NA: The main effect seemed to be in the Rett astrocytes, actually. What was interesting — and this shows the importance of testing all the things that you identify in a screen — was that we saw the same thing in vivo, in the developing cortex; when we looked at IGFBP2 outside the astrocyte there was more in the Rett mice compared with the wildtype mice. And in the Down syndrome model, we saw a buildup of the protein inside the astrocytes; and in the fragile X, in the tissue, we didn’t see a significant change overall. 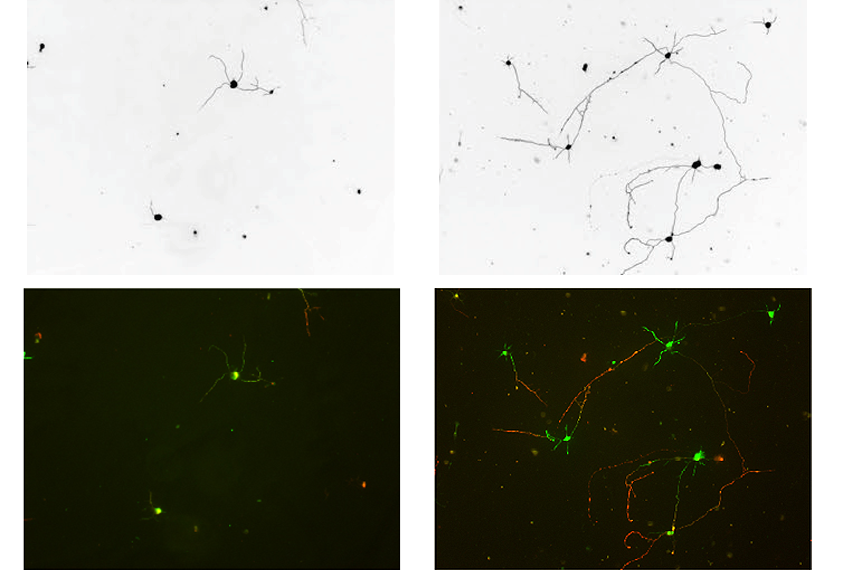 Culture club: Rett astrocytes stunt the growth of wildtype neurons (left), but an antibody that blocks the action of IGFBP2 enables the neurons to grow normally again (right).

S: Could the way IGFBP2 functioned in your mouse model help explain why trofinetide has shown promise in clinical trials in people who have Rett syndrome?

NA: It just gives another insight into perhaps why the IGF signaling is decreased in people with Rett. It may not just be that there’s not enough IGF being produced — it could also be that the IGF that’s being made can’t get where it needs to go because the astrocytes are mopping it all up.

We do think it’s important, and we’re still pursuing ways to block this interaction. It’s not a very feasible approach to be injecting a whole antibody into the brain, as we did in this study, so we’re thinking about approaches that, in vivo, would liberate the IGF from the IGF-binding protein. It’s just a different way of thinking about treatment, because then the IGF will be in the location where it was supposed to be, rather than giving it everywhere, essentially.

S: Were there any other proteins that emerged as being especially important?

NA: We identified — across all the conditions, at varying levels — an upregulation of the BMP pathway. So it could even be an upstream thing we could think about trying to modulate that could have a bigger impact on the overall changes.

We did experiments on wildtype astrocytes and exposing them to higher levels of BMP6, a key component of the BMP pathway. We found that if you then took the proteins these astrocytes released and treated neurons with them, neuronal growth was inhibited, similar to in the different syndromes.

We then found about a 40 to 50 percent overlap in the changes in protein expression induced by BMP activation and the changes that were seen with the neurodevelopmental conditions. So that kind of gave us kind of a hint that perhaps one of the pathways upstream of all these changes is an increase in BMP signaling.

We then took the disordered astrocytes, treated them with an antagonist of BMP signaling called Noggin, and found that there was a partial rescue of the inhibition of neurons’ growth by both the Rett syndrome and the fragile X syndrome astrocytes.

S: What are you planning to look at next?

NA: We’re following up on a lot of these candidates and taking our findings from this reduced cell-culture system to do most of our analysis now in the intact brain in vivo in the different mouse models.

We’re manipulating either the proteins we describe here or some of the others we found and trying to ask whether that has any benefit moving forward. We’re also looking at different stages of neuron development, so not just this early stage but looking later on when there’s changes in synaptic connectivity.

We’re also thinking about doing this with some of the human induced pluripotent stem cell approaches that other groups have pioneered, and to use the same proteomics approaches and ask: Do we see the same things changing, or are they different?