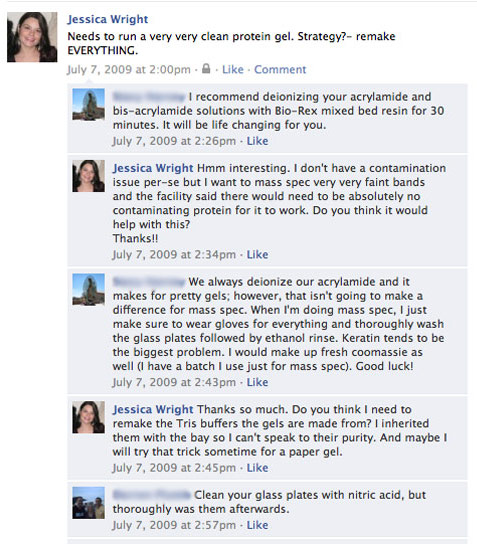 A few years ago when I was an active member of the scientific community, I posted on Facebook that I needed to prepare a very clean protein gel. Several of my colleagues immediately responded with a stream of helpful tips.

Social media is even more powerful now, if anything, and scientists can and should harness its power to answer difficult questions. But as with any easy solution, there is a corresponding cautionary tale: Social media can just as easily misguide as be meaningful.

Positive examples of social media’s role in science abound. Scientists working in the field in Guyana identified more than 5,000 species of fish in less than 24 hours by using Facebook to reach out to their social network of “fish-heads” — people with Ph.D.s in ichthyology — the Smithsonian Institute reported in a blog post in March.

Another study, published in May in Nature Biotechnology, showed that researchers can use information reported informally by patients in online communities, such as Patients Like Me, to evaluate off-label uses of existing drugs.

In the study, researchers compared 149 individuals with amyotrophic lateral sclerosis, or ALS, who took lithium with 447 other people with ALS on the site over the course of a year. They used an algorithm to match the two groups based on various factors, including disease stage. The results, which show that lithium is not an effective treatment for ALS, match those of subsequent randomized controlled studies.

Online communities can also help researchers recruit people with rare disorders, or subsets of symptoms, for clinical trials and other studies.

But there is a troubling subtext to the above example: Why would hundreds of people with a degenerative disorder spend a year taking a drug for which there is no scientific support?

This is the dark side of social media — the ability to create the illusion of legitimacy where none may exist.

One example is the debate over a risky vein-widening procedure as a therapy for multiple sclerosis (MS).

In Canada, a news article on this ‘liberation’ technique led to numerous Facebook groups calling for research into the procedure, despite limited evidence supporting it.

Eventually, the government convened an expert panel to look into the treatment, and concluded that there is not yet enough evidence to warrant a clinical trial. Still, several people with MS opted to seek the treatment outside Canada — leading to death due to complications in two cases.

Social media’s greatest strength may overlap with its greatest danger: the democratization of knowledge. Casting a wide net for information and advice works well, but only when you can trust the source — the “fish-heads” were fish scientists, after all.