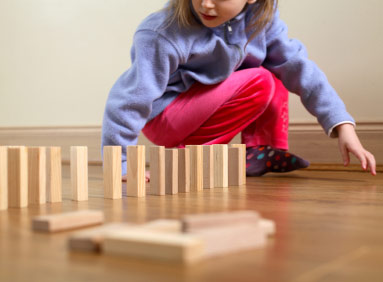 More than 100 years ago, while working in a school for disabled children he had founded with his father, Austrian educator Theodor Heller described cases of children who had been developing normally, and suddenly lost social and language skills around 3 or 4 years of age.

He dubbed the condition dementia infantilis, but we know it as childhood disintegrative disorder (CDD). One of the autism spectrum disorders, CDD is diagnosed in children who develop normally until at least 2 years of age and then rapidly lose social, language and other skills.

As Kevin Pelphrey and his collaborators argue in a review published in June in the Journal of Autism and Developmental Disorders, “the clinical features described by Heller remain the backbone of today’s CDD, marking dementia infantilis as perhaps the longest-lived and most robust of the childhood psychiatric disorders.”

That reign may soon come to an end.

The next version of the field’s diagnostic bible, the Diagnostic and Statistical Manual of Mental Disorders (DSM-5) proposes to fold CDD into the general category of autism. The same has been proposed for other conditions within autism spectrum disorder, including Asperger syndrome and pervasive developmental disorder-not otherwise specified (PDD-NOS).

Pelphrey, director of the Child Neuroscience Laboratory at Yale University, argues that CDD differs from traditional regressive autism — which is typically diagnosed in children who lose language skills beginning around 2 years of age — in its severity, later onset, and rapid and broad decline.

In a Viewpoint describing CDD in April, Pelphrey argued that it should remain a distinct diagnosis because it is enough to cause autism, but is different from whatever leads to autism in children without regression.

Examining translations of Heller’s original case descriptions in German, Pelphrey and his co-authors point out in the new review that Heller described the core symptoms of autism — language deficits, social withdrawal and stereotyped behaviors — long before Leo Kanner’s classic paper was published in 1943.

But studying what makes CDD different from other forms of autism may help us understand autism more broadly. For example, both Pelphrey’s research and Heller’s case studies note a period of intense anxiety and terror before the child’s dramatic loss of skills.

“If we can understand what drives the bouts of terror prior to loss of skills, we might have a clue about the mechanism creating autism,” the authors write. “But if these children no longer have a unique diagnostic descriptor, clinicians will be less likely to bring the unusual, late-regressing children whom they see to the attention of researchers.”