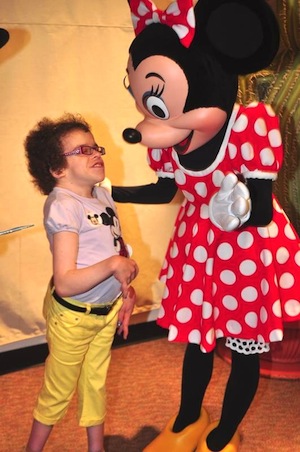 Helaina, a petite, smiley teenager, has had more than 60 operations, including open-heart surgery, and has already battled cancer twice. At nearly 20 years old, she still struggles with speech. Although she devours stories and carries a book with her everywhere, she cannot read. Helaina has Costello syndrome, a developmental disorder that affects her whole body.

Costello syndrome is caused by a mutation that overly enhances a cascade of signals led by a protein called RAS. This leads to unchecked growth of some cells. Mutations in the RAS pathway lead to three other disorders, collectively called ‘RASopathies.’

There are known genetic links between the RAS pathway and autism, but until recently, researchers considered reports of RASopathies and autism occurring together merely “anecdotal” or “suggestive.”

They’ll find it more difficult to do that now. Earlier this month, Lauren Weiss and her colleagues showed that as much as 27 percent of people who have one of four RASopathies may also have autism. By way of comparison, about 30 percent of people with fragile X syndrome, a disorder that is considered to be closely tied to autism, have autism.

“People who are diagnosed with [RASopathies] may need to be referred to autism clinics,” says Weiss, assistant professor of psychiatry at the University of California, San Francisco. “They may need to get some of those behavioral interventions that could be helpful with autism features.”

Many disorders that disrupt cognitive function can trigger symptoms that look like those of autism. So many, in fact, that some researchers warn that anything that disrupts the brain may resemble autism superficially. In the case of RASopathies, however, genetic links between the RAS pathway and autism suggest that the two disorders share an underlying cause.

Among those with Costello syndrome, 26 percent seem to meet the criteria for autism on the Social Communication Questionnaire, a diagnostic test filled out by parents.

This might seem surprising if you meet a child with the syndrome, says Colin Stone, Helaina’s father and founder of Costello Kids, a parent support group. Unlike the common picture of autism, people with Costello syndrome, Helaina among them, are generally happy and social, he says.

But, like many children with autism, Helaina needs things to be organized a particular way, and any changes to her routine make her anxious and upset. She is particular about the book she carries with her. If her caregiver is late, she waits restlessly by the door. She loves to tidy the house — to an extreme. “If we can’t find something, we usually look for it in the [trash] bin,” Stone says, laughing.

Helaina’s symptoms may ring familiar to any parent of a child with autism, but still, for her and children like her, getting an autism diagnosis is challenging. That’s because RASopathies have such severe features — such as heart problems, tumors and unusual facial features — that most doctors miss subtler symptoms.

“They don’t see the tantrums [that arise] because something is slightly not right,” says Stone. “Things are starting to improve, but it is very difficult to get those behavioral aspects recognized.”

Benedicte Symcox has two children diagnosed with autism and another son, Tom, who has Noonan syndrome, a RASopathy. Although Tom does not have autism, Symcox recalls many parents who have struggled to get an autism diagnosis for their children with Noonan syndrome.

“I’m a firm believer in these labels — they provide a sense of understanding and control for parents and patients who otherwise can feel overwhelmed with a list of symptoms that feels dreadfully ‘unfair,’” she says.

The knowledge that autism and RASopathies often go together may help provide this understanding. Helaina, who loves children, is working in a childcare center once a month. “She is awesome. She is amazing,” says Stone. Still, people sometimes react badly when they see her acting out, he says. They think she’s naughty, he says, but she’s not. They just don’t understand.