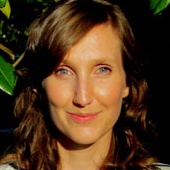 Michael Platt
Professor, University of Pennsylvania
Sign up for Spectrum’s newsletters
Thanks for subscribing! 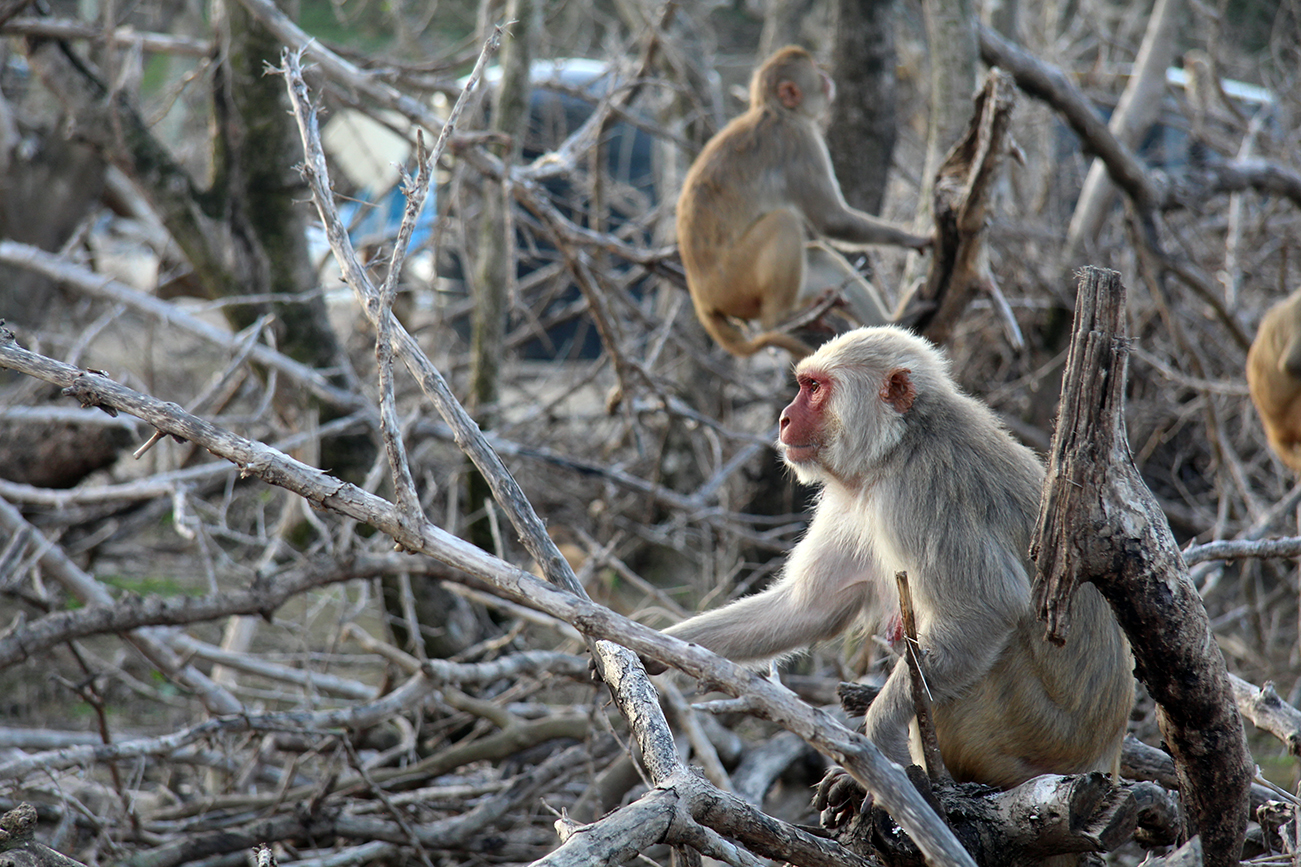 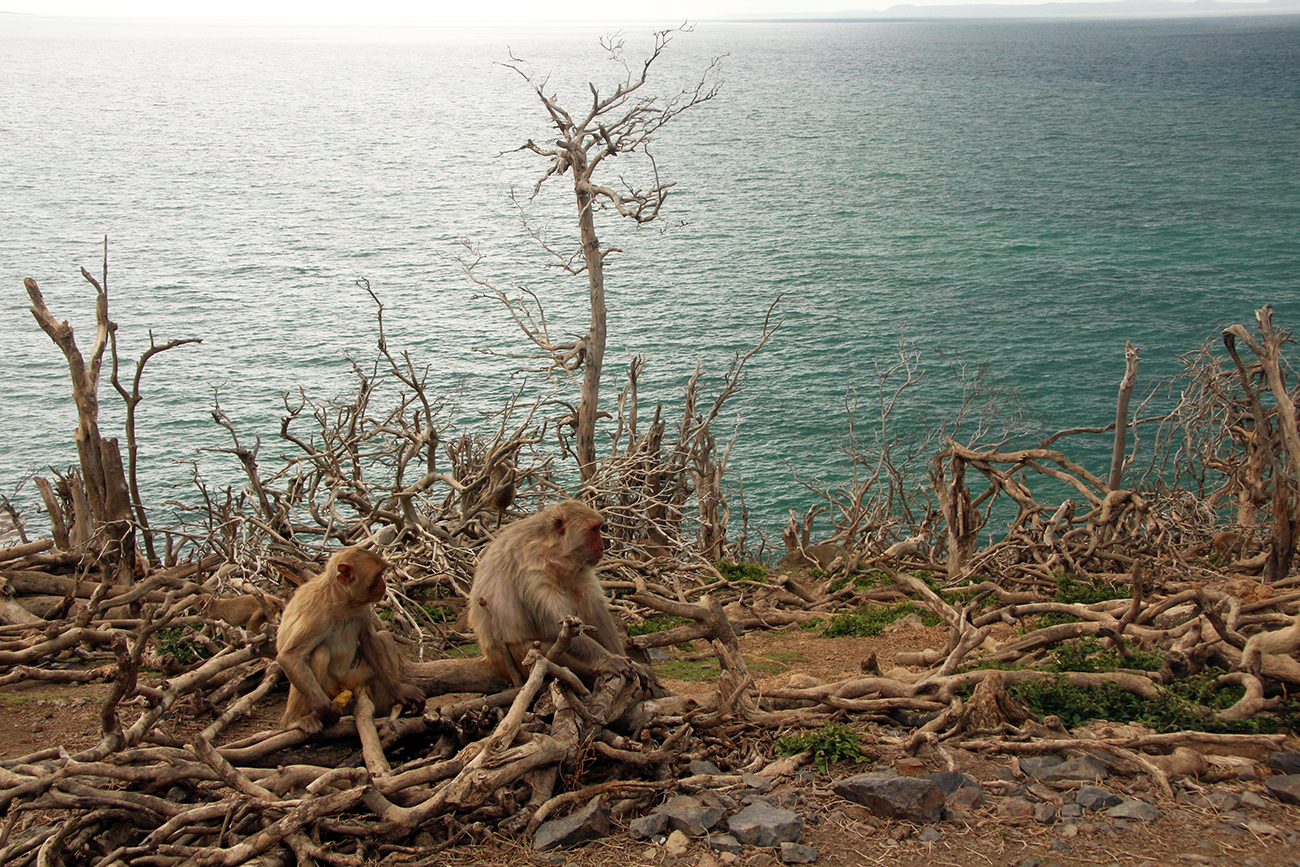 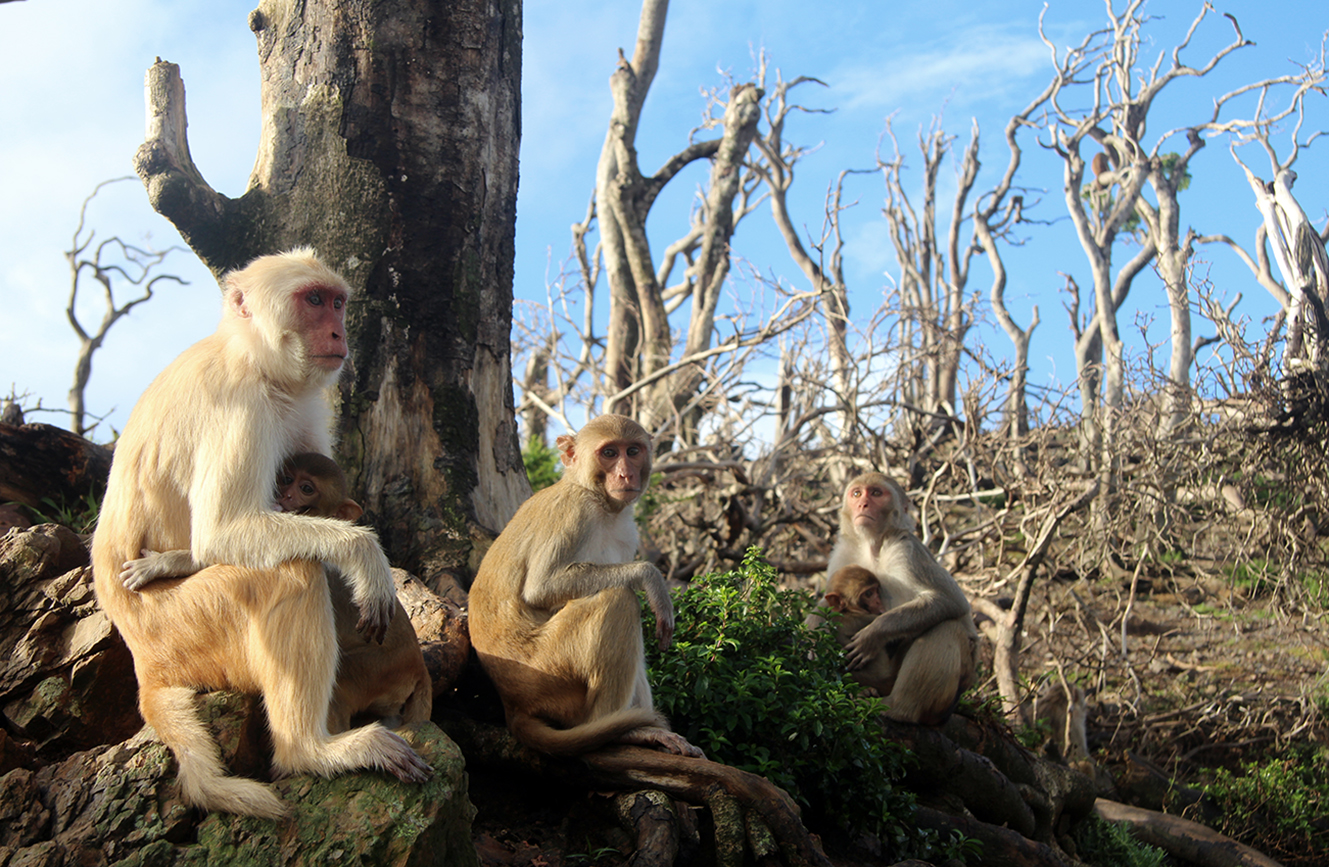 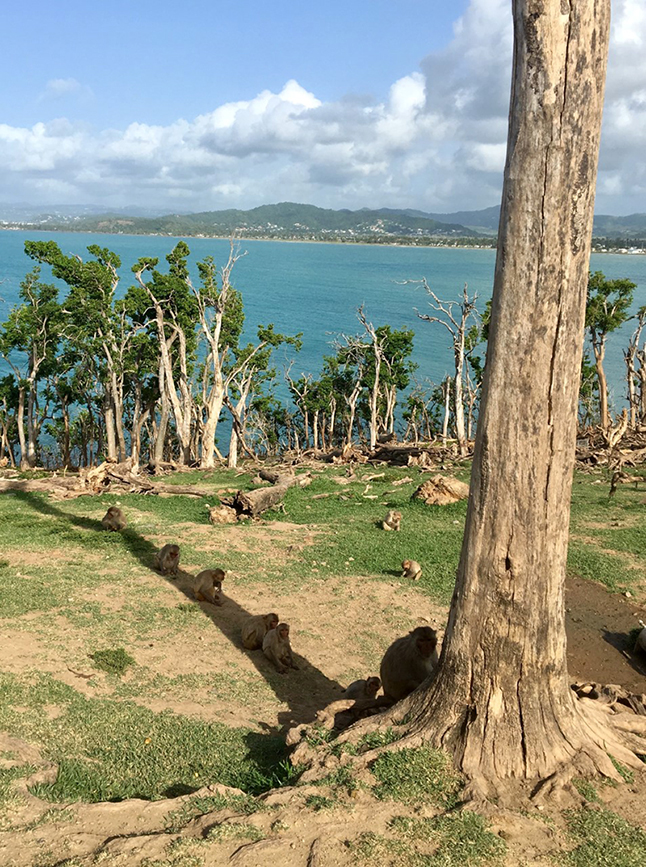 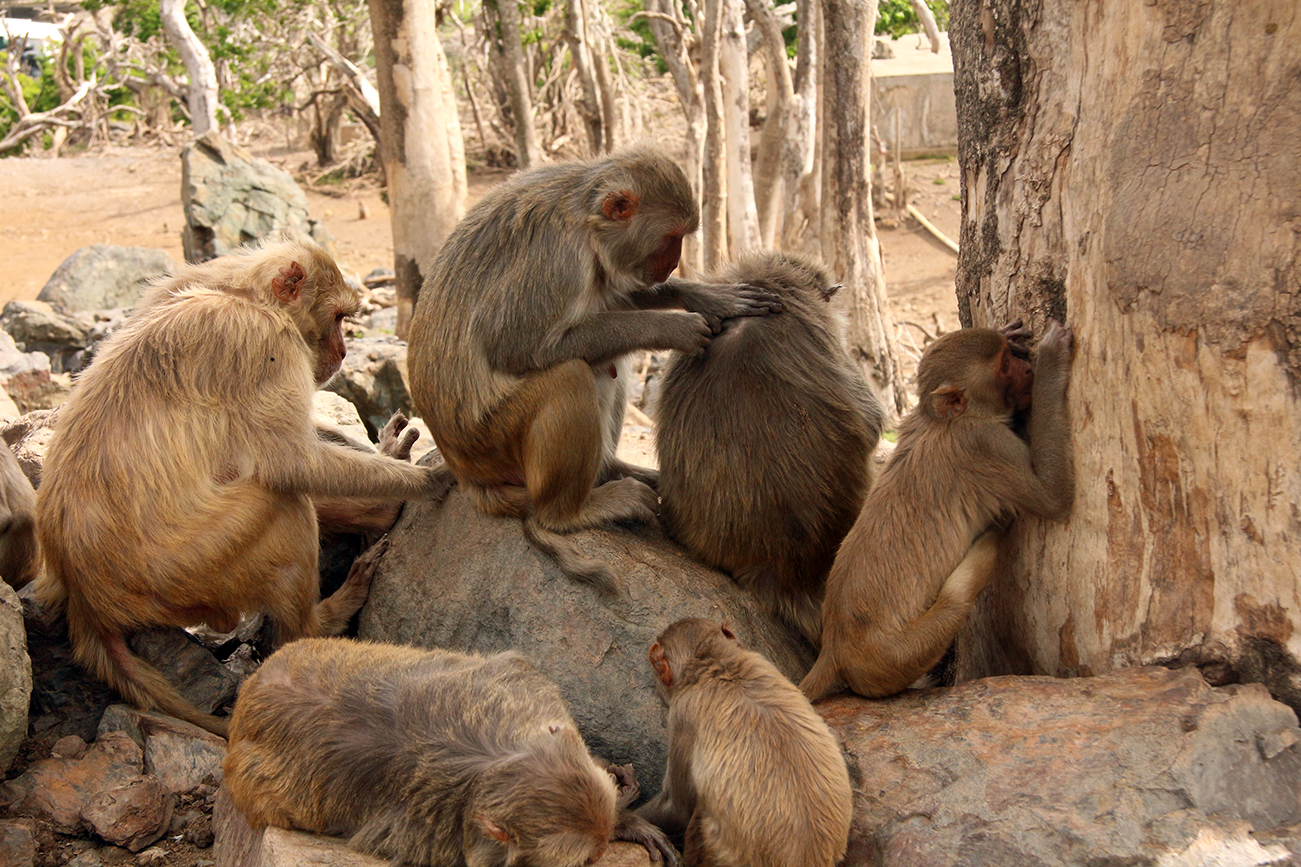 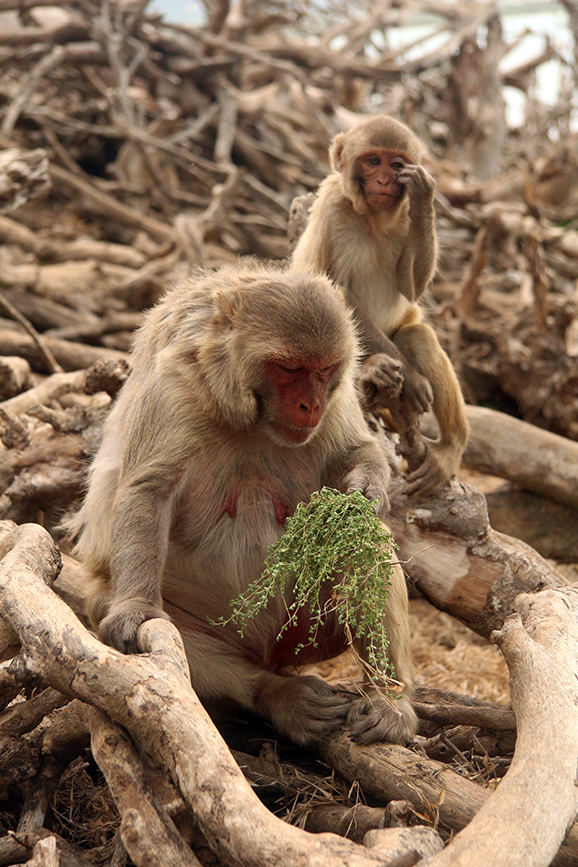 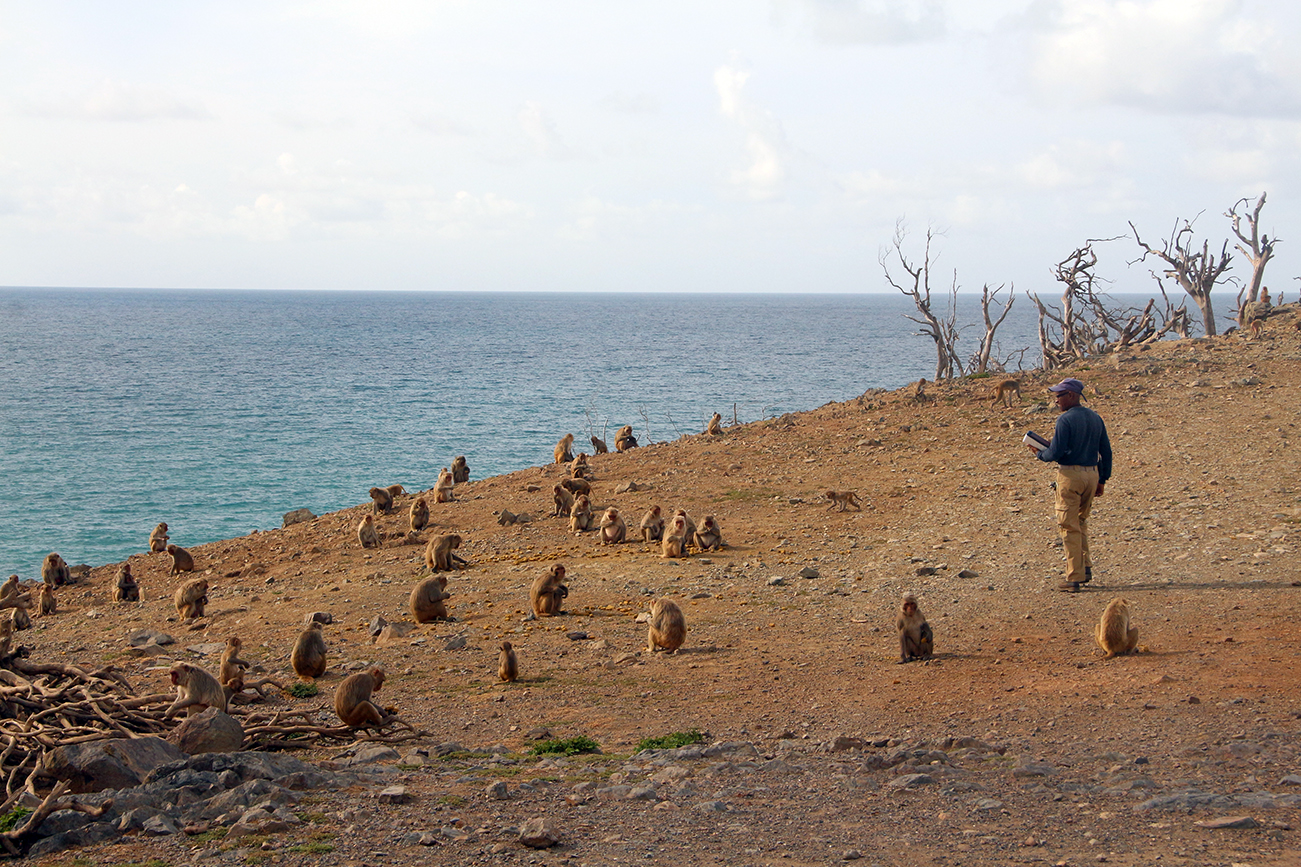 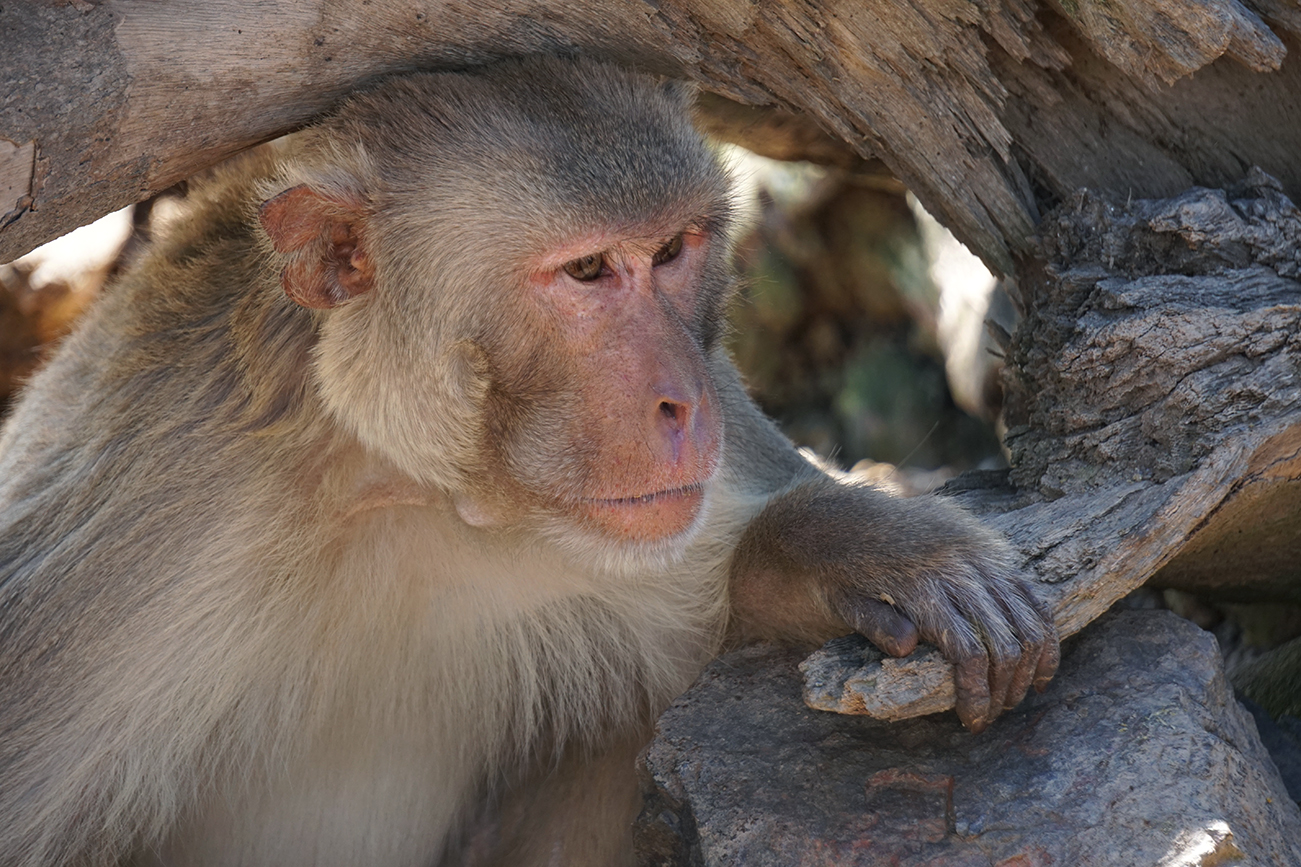 A male macaque sits on dead tree branches and surveys the devastation. May 2018.

A mother and her child explore part of the island where all of the vegetation died. May 2018.

Monkeys reached out to friends of friends and formed new social groups after the hurricane. May 2018.

Macaques line up in the sparse shade of a bare tree trunk at the peak of summer heat. July 2019.

Macaques sit and groom in the aftermath. May 2018.

A mother and her child feed on some of the little vegetation left on the island. May 2018.

Almost all the monkeys survived the storm, according to censuses like this one taken while the animals feed. May 2018.

On 20 September 2017, Hurricane Maria passed over Cayo Santiago, an island off the coast of Puerto Rico that is home to more than 1,500 non-native rhesus macaques. The eyewall, the most chaotic and destructive region of the storm, hit the island with 155-mile-per-hour winds, blowing in every direction. The storm downed trees and destroyed scientific facilities erected by the band of researchers that has studied the animals for years. But somehow, almost all of the monkeys survived.

In the wake of the storm, the animals became more social, researchers Lauren Brent and Michael Platt and their colleagues reported last week in Current Biology. But not in the way the team expected: Instead of engaging more with their existing associates, the monkeys formed bonds with unfamiliar monkeys. In many cases, they formed these new relationships with second-degree connections — or friends of friends.

As many as one in eight monkeys on the island carries a naturally occurring variant of SHANK3, a gene that is closely linked to autism in people. And these monkeys — not unlike all of the animals after the storm — usually transcend social groups and forge connections between monkeys that don’t know each other, according to past work.

Spectrum: What happened to the monkeys of Cayo Santiago in 2017?

Lauren Brent: In the acute sense, Hurricane Maria was very bad for Cayo Santiago and the surrounding area. We didn’t know what had happened immediately. Cell towers were knocked down, and there was no power in Puerto Rico for many months. It was a massive scramble for us to make contact with our colleagues and friends on the ground, to find out whether they were all okay. Three days after the storm, somehow a helicopter pilot in San Juan agreed to take Angelina Ruiz-Lambides, then-scientific director of the site, up in his helicopter so she could survey what was going on with the monkeys. We thought, worst-case scenario, that the monkeys would just be gone. These are small animals. A big male will weigh, at most, 30 pounds.

Angie was able to fly over and land, and she saw at least some groups of monkeys traveling together. It looked like it was not as bad as it could’ve been. However, all of our research infrastructure on the site that we and the monkeys use on a daily basis, was basically destroyed — where they get fed, where they get water from, where researchers store our equipment, where the staff store heavy machinery to move around the island — that was pretty much all completely devastated. In the weeks and months afterwards, we realized that actually very few animals had died from the storm. I don’t know how they survived a Category 4 hurricane, but very, very few individuals actually died.

After the storm: Hurricane Maria destroyed almost all the vegetation and infrastructure on Cayo Santiago, as seen in this footage taken by scientist Angelina Ruiz-Lambides from a rescue helicopter.

S: How did how did the hurricane affect the autism-related research on the island?

Michael Platt: This had a huge impact on research. The staff we work with down there had their lives upended, but they are so dedicated to the work that they went back out there within days. They began making observations and taking censuses to understand which monkeys were around, who was traveling together and what kinds of things had changed. So we were able to continue getting behavioral data, but getting the other kind of biological data collection back up and running was a much bigger challenge.

LB: We did a lot, but we’re still not back to how it was before Maria.

MP: Some things are even better, though. It was a good opportunity to replace some of the aging research infrastructure, so we have a better-functioning lab there now. And since 2016, we have been undertaking a very large biobanking effort, including behavioral data, demographic data, life history data, DNA, all of that going back 14 or 15 years, and now brains and body tissues and microbiome data on some 348 monkeys.

That puts us in a really incredible position to look at the existing variation in the biology of these animals that contributes to variation in their ability to integrate into society. The relevance for autism is how this existing variation goes through this incredible winnowing flame of the hurricane, and coming out the other side, some monkeys have the capability to become much more social, and some monkeys do not. Whether the intrinsic factors shape that difference will be of real interest, as well as how that impacts their success later in life, their ability to survive and reproduce.

In particular for autism research, we know from human studies that maternal stress is a major contributing factor to autism. And this hurricane actually occurred during the birth season, so some females were giving birth just before and during the hurricane, and some just after. We now have a cohort of monkeys who are a few years old, in whom we could potentially see some of the impacts, if there are any, of going through a huge maternal stressor.

S: In your new study, what did you find out about how the monkeys restructured their social networks after the hurricane?

LB: Like a lot of behavior work, this study was originally inspired by what our research assistants were seeing on the ground. They were telling us, “Look, the animals are acting more tolerant towards each other,” and they’re normally really competitive.

So we decided to try to quantify it. We expected to see a change in their social networks, and that they would reach out to their existing allies, their existing social partners, their relatives, their friends from before, and that they would be strengthening their relationships with those individuals. If they were becoming friendlier, then that seemed like the obvious choice to us.

Instead, we found that they were spending the same amount of time engaging in social behavior, but they were investing more time in a wider range of individuals. They didn’t necessarily drop their friends from before, or their relatives who were still hanging out with them. Their social networks just got bigger and broader.

We delved into who was forming these relationships, and it tended to be individuals that were friends of friends. They were closing triangles in their social network, which is a path of least resistance.

MP: It was really surprising that the monkeys who were pretty isolated, who didn’t have more than one or two friends, were actually now getting much more bound up in the social network on the island. This suggests that prior to the hurricane, it wasn’t important enough to build in that social time. And after the hurricane, it was. They were taking time away from other activities.

S: What are the implications of this restructuring for autism research?

LB: To me, these results confirm things that are already fascinating and already have implications for autism research: that there’s individual variation, not just in how integrated or isolated individuals are, but in their ability to respond to extreme events, extreme stressors. There’s variation in how animals socially respond to those events. And the fact that these animals are so flexible is also something that one might find surprising — the fact that they’ve changed so dynamically, so quickly, to a major event.

Their network went from the way that it’s been structured for years to being structured in a quite different way, just in the few months after a major event. That’s pretty amazing. It suggests that even if there’s a genetic underpinning to some of the tendencies that individuals have, they’re not set in stone. There are pushes and pulls still going on in the environment that you can respond to.

That might be a long line to an autism implication, but I think there is a line there.

MP: The fact that we’re studying an animal that forms these differentiated relationships, but also has the capability to be flexible, and to learn and to change, is something very different from what you see in a mouse. It’s more similar to what we see in people.

S: How have the monkeys with SHANK3 variants fared?

MP: We haven’t gotten down to that level of analysis yet, but it is in the queue.

But we have really amazing preliminary data from before the hurricane showing that variation in social integration is strongly associated with variation in the size and connectivity of a number of really important nodes in the brain, which are part of the social brain network that we understand very well from laboratory studies.

A lot of work that we do in my lab, in particular, is about the way that these parts of the brain encode various aspects of social information, and that in humans, the size and connectivity of the social brain network is linked to certain aspects of social behavior. Our next steps would be looking at how that underlying biological variability translates into monkeys who are able to form connections after the hurricane versus those who are not.

We’re interested in whether we’ll see changes in the social brain network as a function of changes in the monkeys’ behavior, because we know that from laboratory studies, you can dial it up: If you force monkeys to interact with more monkeys, then those parts of the brain actually grow. We anticipate that we will potentially see something like that. This is an opportunity where we can begin to bring all of those factors together and start to home in on the real causes and consequences of all this variation.