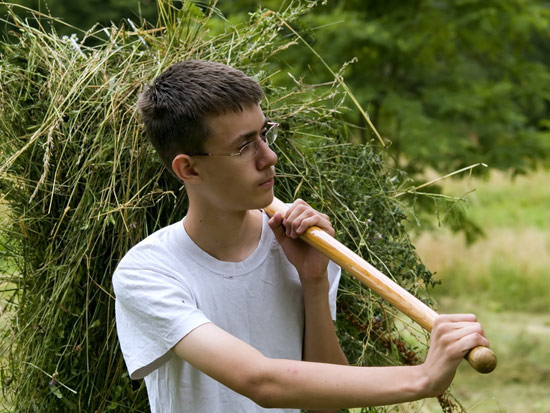 The part of Brooklyn where I live is full of urban farmers growing kale, beets and other vegetables on their rooftops. So when I read that a new autism institute set to open in 2013 just outside New York City will include a working farm, I wasn’t too surprised.

Farming is increasingly viewed as a viable — indeed, a therapeutic — job choice and perhaps one well-suited to the occupational needs of people with autism because of its solitary nature.

Growing vegetables and tending livestock are just two of the employment opportunities that will be available at the new Institute for Brain Development at New York-Presbyterian Hospital. The institute is a collaboration between New York-Presbyterian Hospital and the New York Center for Autism, a nonprofit group founded in 2003 by philanthropists Laura Slatkin and Ilene Lanier that has raised more than $20 million.

And it’s part of a grand plan to create a hub of services for people of all ages diagnosed with autism spectrum disorders. Beginning with a clinic that will offer diagnostic and evaluation services, the program is set to gradually expand to include housing and employment for people with autism.

Situated on the hospital’s 214-acre campus in White Plains, New York, the institute aims to offer internships at the hospital and connect people with autism to jobs at shops and businesses in town.

It will also be a research hub, says Catherine Lord, who will lead the center.

Full disclosure: Lord has been a member of SFARI’s advisory board and is principal investigator of the Simons Simplex Collection. And Jim and Marilyn Simons, founders of the Simons Foundation, SFARI.org’s parent organization, contributed $5 million towards the project.

But I would find the proposed programs interesting even if none of them were involved. I’ve written often about the difficulties experienced by adults with autism who struggle to find employment and social outlets. The institute is one of few autism centers that seem intended to focus specifically on this need.

Though the institute isn’t scheduled to open until early 2013, Lord and another clinician plan to begin providing psychological services over the next few months. It will ultimately include a staff of about 40 people.

Lord says the institute is meant to fill in gaps in services for people with autism rather than duplicate existing programs. For example, one of the first initiatives to get up and running later this year will be a Spanish-language treatment center, a rarity even in New York City.

The institute will also collaborate with community outreach programs to find more options for therapy for people with the disorder. These include programs for just-diagnosed children, targeted short-term interventions for problems such as anxiety, and diagnostic and treatment services across all income levels.

It’s an ambitious program, but if anyone can make it work, Lord can. Best known as co-creator of the two gold-standard diagnostic tools for autism — the Autism Diagnostic Interview-Revised and the Autism Diagnostic Observation Schedule, Lord has a long and distinguished career in autism research. She’s also a smart clinician and a warm and generous mentor — qualities that I’m sure will enhance the teaching mission of the program.

The new institute will provide training in diagnosis and treatment for clinicians, as well as autism boot camps for basic scientists interested in pursuing research in the field. “The clinic is the fulcrum,” Lord says.