Exposure to ‘auntie’ mouse is therapeutic for fragile X mice 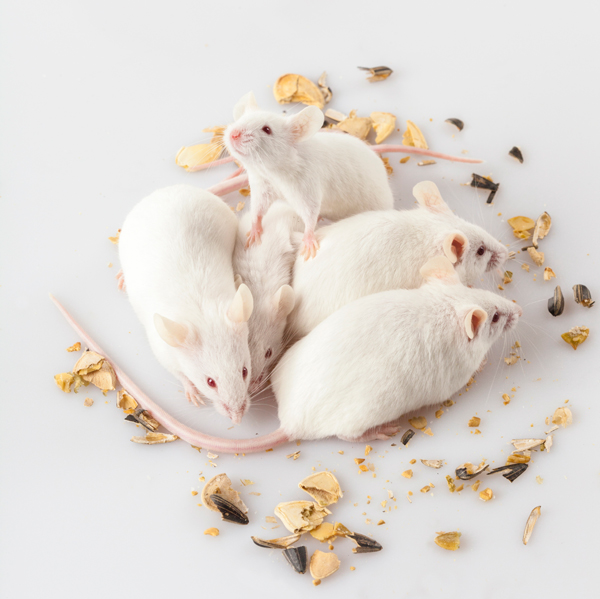 Over the past decade, some researchers have been tirelessly testing the effectiveness of early behavioral interventions for autism. Others have been hard at work characterizing and manipulating mouse models of the disorder.

Both are fruitful lines of research, but at first glance they would seem to have little overlap. The idea of testing early intervention in a rodent sounds almost comical.

But researchers in Europe say they have found a way to do just that. In a paper published 28 October in Neuropsychopharmacology, they report that growing up with an ‘auntie’ mouse reverses social and cognitive deficits seen in mice that model one of the most common forms of autism.

The mice lack FMR1, the gene mutated in fragile X syndrome. They are more active than control animals, show little interest when introduced to a new mouse, and struggle with finding their way through a maze — behaviors that mimic the hyperactivity and the social and cognitive impairments seen in people with fragile X syndrome.

In the study, researchers raised these mice in cages with their mother, littermates and an unrelated additional adult female. They say this arrangement mimics early intervention, as mice raised in this ‘enriched’ environment get more social stimulation early in life compared with those raised in standard cages.

Other researchers have used toys and running wheels to created enriched environments, but those don’t improve fragile-X-like symptoms. The pups in the new study have more physical contact because of their cuddling with the ‘auntie.’ As adults, these mice are indistinguishable from controls. Interestingly, social enrichment has no effect on control mice, suggesting that the extra stimulation addresses deficits associated with fragile X syndrome.

It’s easy to be skeptical that the mere presence of an extra female mouse mimics the hard work of providing behavioral therapy for autism. If early intervention were as simple as more parental attention, many children with fragile X syndrome and other forms of autism would already be thriving.

The researchers are careful to point out that their findings don’t suggest autism is caused by inadequate parental care — that pernicious ‘refrigerator mother’ hypothesis was debunked long ago. However, some research on 1-year-olds suggests that interventions focused on strengthening parent-child interactions can help children at high risk of autism. The new study most closely resembles this situation, the researchers say.

But for those who remain unconvinced, the researchers go one step further: They show that social enrichment actually changes the brains of fragile X mice.

FMR1 helps orchestrate the formation and maturation of synapses, the junctions between neurons. Because of this, mice lacking FMR1 have abnormal synapses. Specifically, the mushroom-shaped protrusions on the receiving end of synapses, dubbed dendritic spines, are immature.

The same abnormality is seen in the brains of people with fragile X syndrome, and is thought to contribute to the cognitive and social deficits characteristic of the disorder.

In the new study, adult mice raised with two mother figures have normal dendritic spines in the amygdala and hippocampus — brain regions that show dendritic spine abnormalities in fragile X syndrome. This suggests that the social enrichment helps normalize synapses in fragile X mice, overcoming the effects of mutant FMR1.

Perhaps researchers should try raising other mouse models of autism in socially enriched environments: This could help gauge whether certain subtypes of autism are more likely to respond to behavioral interventions than others.

On the other hand, behavioral intervention isn’t a one-size-fits-all endeavor. Rather, different children with autism need different combinations of play-based, structured and language-focused interventions. Those details are likely to remain well beyond the reach of rodent models.